Shameless is back! Finally!!! Ohhhh, how I’ve missed the Gallaghers!

The episode (S03E01) starts with  “You really don’t remember what happened last year?!” and proceeds to a great recap of last season.

Then we see that Jimmy has stepped up into mr. mom role, he feeds the children, makes them lunches and sends them to school (and there’s the matter of Carl eating popsicles, and Fiona getting mad at Jimmy for allowing it, ’cause his teeth are gonna rot and fall and they just spent all that money on his braces – actually Jimmy paid for it – and she gets even madder!) – Right about here there’s an almost adult rated scene in front of baby Liam, but Fiona cuts it.

We learn that Frank has been missing for 137 days and Debs is the only one who actually cares! Frank wakes up in Juarez, Mexico, not having any idea how he got there, and worries if he missed Christmas (“Christmas? You almost missed Easter.”).

Then we see Lip and Ian fleeing some kind of institution with a metal suitcase, pursued by 2 campus securities, that eventually catch up to Lip (but not Ian, because that would be bad for his military career).

Sheila and Jody are together and taking care of the baby that Karen didn’t want (and by the way, where is Karen?!).

Frank then tries to cross the border, but without any passport or some sort of ID, is not gonna happen.

At the Gallagher’s, Jimmy goes to the bathroom to pee while Fiona is washing her face on the sink, which she is not OK with! She then proceeds to complain to her BFF next door, while Veronica and Kevin get ready for a live webcam show (and by the way, Kevin looks insanely hot! Even with a broken leg…). – the concept of the live webcam sessions however, is wrong, just wrong (slave/owner thing)! So apparently she’s upset because Jimmy cooks, cleans and takes care of the children (I don’t get it!). “There is nothin’ sexy about a man with a mop.”

Jimmy, in his housewife bliss, is cleaning and then makes Liam’s lunch and afterwards grows very uncomfortable by the cars parked outside his house and decides to get a closer look. Bad Bad call! He’s gunned down by the Brazilian guys that work for Estefania’s dad (that deserves a shout-out, because he’s actually played by a Portuguese actor: Pepe Rapazote). (and the baby is left in from of the TV… all day!).

Lip is presented to the judge and get lucky because he’s still a minor. Calling from Mexico, Frank’s call is rejected by Fiona, and then Sheila hangs up on him (good for her).

Jimmy is then dragged to Estefania’s apartment, where her father shots Marco (who is totally naked) in the head. Then he and his men begin the clean up process, that involves dismemberment, and he makes Jimmy (aka Steve) be involved in the process (poor guy!).

In Mexico, Frank tries to cross the border with the help of a coyote. That does not go well and he gets caught! 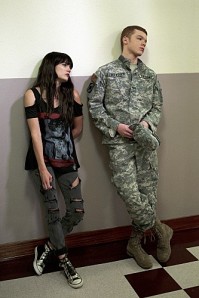 After cleaning a lot of toxic (and disgusting) waste, Fiona gets fired (if you haven’t seen the episode, please don’t do as i did… I watched it while I was eating dinner… I’m just saying… DON’T!).

So everyone gets home, the door is wide open, Liam is in the couch alone, and no Jimmy (which is weird… and as Carl points out… he didn’t bake any cookies for after school), so they eat tuna!

Fiona comforts Debs, by telling her that Frank will always come home, because they couldn’t get rid of him even if they tried, then goes to Jimmy who is outside burning all his bloody clothes (including his underwear)…

At school, the guidance counselor basically tells Lip that he IS going to college and he  HAS to work on his resume during the summer (because he’s a genius!).

Fiona heads back to Veronica’s house to brainstorm about getting a new job, while the couple prepares for yet another webcam show (Thomas Jefferson and Sally Hemings)… “We shall overcome, motherf*cker!”. Fiona goes to the club she once worked in and the manager says that she can have a night to promote if she pays 1000$. First Fiona doesn’t want to do it (cause she doesn’t have the money) and V offers to loan her the money, but Fiona uses the money that was supposed to be to pay the house (which I’m guessing it’s not going to go well, mainly with Lip).

Jimmy spends the day with his father in law (while he shoots at random fruits, eats and throws pieces of Marco into the sea), who tells him that he is going to do right by his daughter and the a good husband (so no stealing cars or any funny business, so how is Jimmy getting to get any money?! “find a job!”). He allows Jimmy to continue to be with Fiona (allowing him to “f*cking that ghetto whore”). 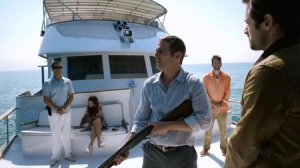 In a desperate move to get back in the USA, Frank serves as a drug mule…”There’s no way I can swallow that!” says Frank… well, they’re not for swallowing… So Frank walks very very funny by the border patrol, he gets in the country with a fake passport. A woman is waiting for him that tells him he has a new nickname, “El Grand Canon”, because the former record for transporting coke balloons was eight, and Frank managed 18 (“It’s like taking sh*t backwards.”… 18…).

It’s reveled that all this time Lip was actually building a robot for battle, and he wins, against all odds, because his robot has a working laser! He wins a trophy and 400$, and gives the money to Fiona for the property taxes (little does he know that she gave all that money away to promote her night at the club!).

All is right with the world, ’cause Jimmy is cooking again, and in the middle of dinner Frank gets home, they all stop to look at him, but Debbie is the only one to get up and hug her father, the rest of the gang just goes back to what they were doing… and by the way, did Mandy move in or something?!

In the after credits scene (which I almost missed) we get to see that they were actually 19 balloons… “Thank you, Sheila!” (because of all the things she did to him…)