I got off to a rocky start! My plane was delayed for over 2h30min, which meant that I arrived at Gatwick around 8:15 pm!!!

I finally managed to get to the hostel around 10pm, got into my room and was unpleasantly surprised by my bed – let me clarify that at the time of the booking, I requested a bottom bunk, so when I get to the room and see that the bunk beds have 3 levels and I’m on the middle, I wasn’t exactly thrilled. The room was complete and I was exhausted, so I went to sleep, thinking that maybe it wouldn’t be so bad. It was, I don’t know why exactly, but I slept terrible – I was cold at first, because the window was open (for the smell of over 12 pairs of shoes), then in the middle of the night it was extremely hot, someone had closed the window and now there was the body heat and breathing of 12 full grown adults… that was the first night!

So on Monday I woke up quite early to get to the conference meeting: “Ancient DNA: the first three decades” at The Royal Society. It took me awhile to get myself oriented around the conference site, but I managed. And WOW! I could have spent the day hearing Dr Carles Lalueza-Fox (Institute of Evolutionary Biology, Barcelona, Spain) and Professor David Reich (Harvard Medical School, USA) talking about Neanderthals and Denisovans. At some moment, talking about the cut marks present on the Neanderthals from El Sidron, which are a sign of cannibalism, Dr Lalueza said: “Apparently, if you’re a cannibal, you can’t miss the tongue” – because of a specific cut mark that indicated the removal of the tongue. After presenting the data that indicated that there was some inbreeding between late Neanderthals and fairly modern Humans, someone asked Professor Reich: “So, you’re saying that they copulated?”, Reich avoided the word, maintaining the term of inbreeding, but he eventually said an undertoned “yeah” when the person in question didn’t gave up on the subject.

The afternoon was dedicated to microbes and diseases, with a fascinating talk about the “Ancient Pathogen Genomics” of the Y. pestis (black plague) and the M. leprae (leprosy) from Dr Johannes Krause (University of Tübingen, Germany). I find this subject fascinating and the papers are something else! 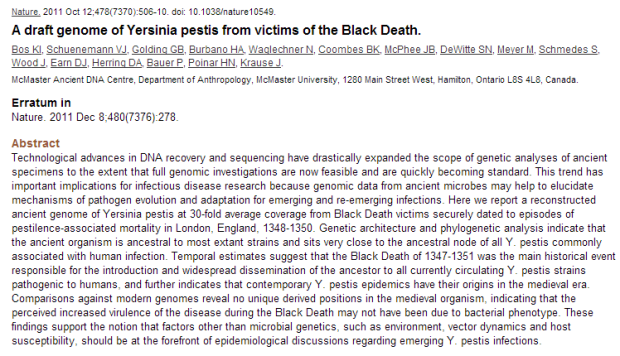 When I ot back to the hostel, I was in desperate need to charge my phone! I’m a travelled girl, and I always carry around my universal charger, but it happens that due to the disposition of the electic sockets of my bunk bed, the charger didn’t fit, I looked around the room and nothing, the only electric sockets that exist are on the beds, and are all the same. So I came down to the common room, but the waiting list to charge stuff was quite big – I guess a lot of people has the same problem – so I complained in the reception desk, because it isn’t my fault that the sockets are not prepared to receive adaptars. So they lend me one small one!

Today morning I asked if I could change to the bottom bunk, and said yes… not all is lost!

The conferences today were somehow less on my area of interest – sure, the subject was mainly domestication (correlated to the Neolithic revolution), on subjects as crops and chicken. The second talk on chickens though, blew us all away! Dr Greger Larson (Durham University, UK) gave the funniest I ever heard. He started his talk explaining why Professor Dr Ian Barnes should be stopped and how he was glad that for once, Ian was not invited to speak at this conference and he then explained why: Dr Ian Barnes has better stories, better data, better everything, and he’s funnier that everyone in that room combined (and mind you, there were more than 200 people there). Following this, he explained that it’s not because something is fixed that it means that it’s old, explaining then how several kind of media would report such news! – Hilarious!!!! Super funny, made his point on his results, criticizing at the same time some of the huge problems on the way we get our information nowadays:

To end an amazing presentation, Dr Larson “contacted” Dr Ian Barnes to comment on the “Yeti proven to be giant chicken” conclusion:

Sadly, the conference came to an end today!

Now back at the Hostel (now on the bottom bunk, charging my PC and phone at the same time in the common room), I’m planning my day tomorrow! On the plans are the changing of the guard at Buckingham Palace, the Natural History and Science Museum, and the British Museum. Hyde Park and Harrods are also on my plans.

AH, and I tried the delicious eggnog latte from Starbucks! =D