Oh yeah! The Cul-de-Sac is back and in shape!

Travis and Laurie are on, totally on, to much discomfort of Jules, who can’t really handle the fact that her only son is making out all the time with her friend. After a few failed attempts to handle, one of which ended up with her interrupting the new couple having sex on the shower, she finally embraces the relationship, because they all love each other.

“Well, she reached out and grabbed onto my honks, but they were so sudsy from Trav washing them for 20 minutes.”

“They were very dirty.”

Andy and Ellie had to deal with the fact that Stan can’t sleep because his father let him watch a horror film, and now he’s afraid of Fred Kruger… Andy wants to pretend kill Fred, but Ellie has him moving to Canada instead.

Bobby gets a load of money from overseas sales of penny can and Grayson tries to get him to pay is enormous pub tab. But because Bobby isn’t exactly the brightest of the bunch, he doesn’t get the message. He gets it in the end and the two men declare their love for each other.

The Time of the Doctor saw the last adventure of the Eleventh Doctor, Matt Smith. It was definitely an emotional episode (I spent a lot of the hour crying, and Matt is not even my favourite Doctor!). We also got the first real glimpse of the Twelfth Doctor, Peter Capaldi.

No one can deny it was a brilliant episode. Steven Moffat outdid himself and left no stone unturned, closing in all the loose ends that we left throughout the 3 season’s of Smith’s tenure. From the crack in the Universe, to the Silence, Weeping Angels, to River Song (although I was so sorry she didn’t appear), to Matt Smith’s wig – and man, I was glad that he took it off for a while, because that did not look real!

More than 300 years elapse in this episode, all while the TARDIS is cooking Clara’s Christmas dinner turkey… =)

Clara asks the Doctor to play her boyfriend for Christmas dinner and while the turkey in cooking, they decide to go to this planet to find out the origin of this weird message. Oh, the Doctor has a new friend, Handles, who is nothing more than a Cyberman head!

The two are invited aboard the Papal Mainframe, a space church headed by Mother Superior Tasha Lem, who sends them to the planet and they get to the town called Christmas, where they find out that they cannot lie. Here the Doctor finds a crack in time through which the message is being broadcast: “Doctor who?”. The Doctor realises that this is the Time Lords, trying to get out – if the Doctor speaks his real name, the Time Lords will know they are in the right place and come through and thus will begin a new Time War. 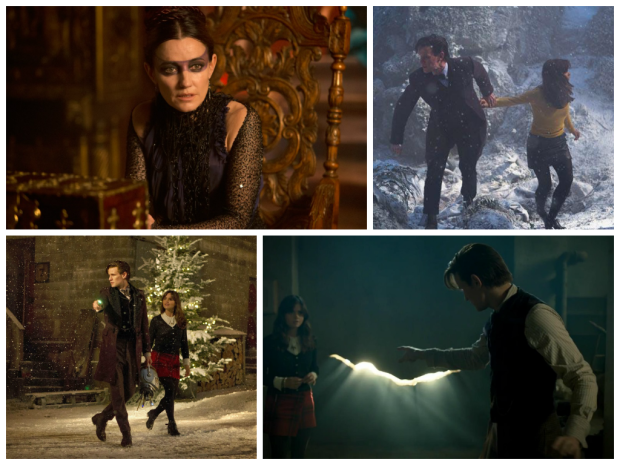 Tasha forbids him to do so and the Doctor refuses to withdraw and let his enemies destroy the planet, Trenzalore.

The Doctor tricks Clara to get to TARDIS and back home, and for 300 years he stays in Trenzalore, defending Christmas from all his enemies. But Clara, realizing that the TARDIS was leaving her behind, griped the sides of the box and went through the time vortex, back to Trenzalore.

The Doctor shows Clara his town, his new place, with drawing of his adventures all around, and together they prepare do see the sunrise (the sun lasts very little there) and Handles finally passes away. 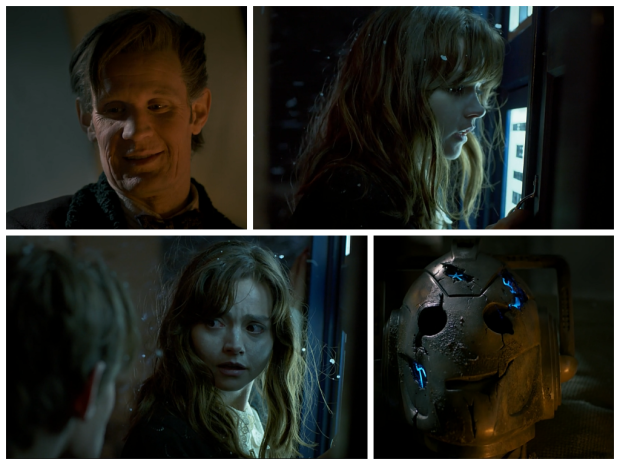 Everyone gets stuck somewhere eventually, Clara. Everything ends.

The Doctor is old now, but Clara is sure he can still regenerate… he doesn’t die. The Doctor informs her that she isn’t wright, there’s a limit, he can only regenerate 12 times.

I can change 12 times. Thirteen versions of me. Thirteen silly doctors.

Number Ten once regenerated and kept the same face – I had vanity issues at the time.

They are then summoned back to church, where they find out that everyone has been taken over by Daleks. Tasha manages to fight it though, and helps them to escape. The Doctor ends up sending Clara back to Earth, without her knowledge, and he gets back to Trenzalore, where he spends the next few centuries fighting the rest of his enemies.

Still at Christmas dinner, Clara ears the TARDIS and finds Tasha inside it, picking her up, because the Doctor shouldn’t die alone. She finds the Doctor very old and unaware of time, still fighting the Daleks.

And now it’s time for one last bow, like all your other selves. Eleven’s hour is over now, the clock is striking Twelve’s.

When the Daleks lunch their final attack, Clara knows the Doctor will die and pleads with the crack in the wall:

His name is the Doctor! All the name he needs, everything you need to know about him, and if you love him – and you should – help him!

This seems to do it, when facing the Daleks, regeneration energy is seen getting to the Doctor and he uses it to destroy them and the crack vanishes.

When Clara returns to the TARDIS, she find the Doctor redressed and young again, a reset. Hallucinating, the Doctor sees little Amelia Pond running around the TARDIS…

We all change, when you think about, we are all different people, all through our lives, and that’s okay, that’s good, you’ve gotta keep moving, as long as you remember all the people that you used to be. I will not forget one line of this, not one day, I swear. I will always remember when the Doctor was me.

Amy Pond, adult now and with her wedding ring on, descends from the balcony, places her hand against the Doctor cheek, and bids him goodnight.

After taking off his bowtie, only a mere moment passes and he has regenerated into a new man, a new Doctor – Peter Capaldi. – The look on Clara’s face is priceless! 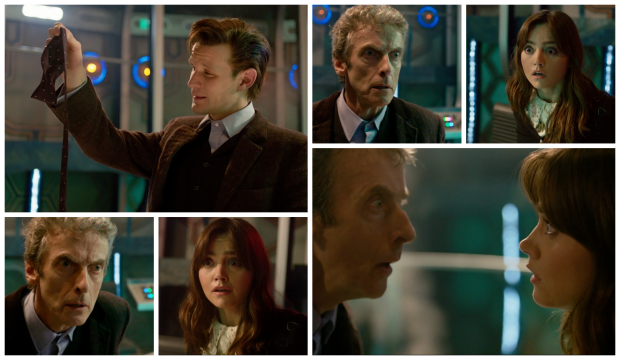 Kidneys! I’ve got new kidneys! I don’t like the colour…

No worries, stay calm, one question.  Do you happen to know how to fly this thing?

I enjoyed the episode, not my favourite, but good. I do think it was a lot of material to cram into 1 hour, for instance, we don’t get conveniently attached to Handles, we don’t really understand or care about Clara’s family given that they weren’t introduced before.

We never know why they have to be naked – I know a lot of people have a problem with this specific matter, I honestly don’t care, I just think that it wasn’t essential to the plot, it was a comedic bit, but past the first scene in the TARDIS and meeting the parents, it lost it’s punch…

Matt Smith was excellent, just terrific, and I’m starting to really like Jenna-Louise Coleman in her role as Clara, can’t wait to see her with Peter Capaldi.