Yesterday I saw Austenland (2013), a movie based on a book with the same name by Shannon Hale, published on May 9, 2007. The movie counts with a cast of fairly known names, such as Keri Russell, JJ Feild, Jennifer Coolidge, Georgia King and Jane Seymour.

It’s about a thirty something girl who’s obsessed with Jane Austen’s universe and because of it hasn’t manage to find a guy yet. So she goes to Austenland, a “resort” where everything is as in the books, and the ladies are guaranteed a romance and an engagement by the end of their stay. 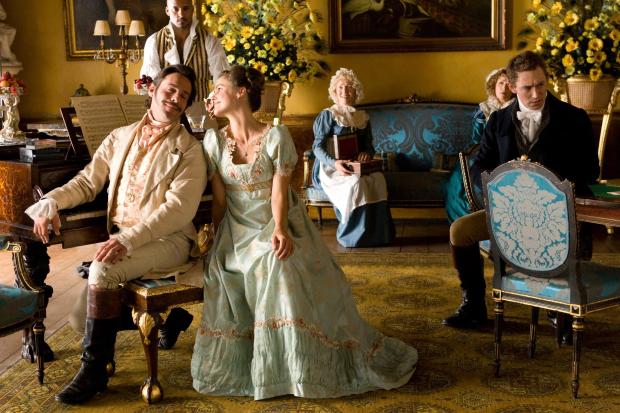 This don’t go exactly as she planed. She spends all her life savings and that only gets Jane into the lowest package, which doesn’t include riding inside the carriages, fancy clothes, a good room or a man.

She soons becomes interested in one of the servants, Martin, who listens to modern music, is great with horses and takes her away from all those pretendings inside the manor. The two start an affair, that ends shortly after because of some misunderstandings.

Deciding to play the game for real, Jane decides to transform herself, she puts on nice clothes and court the men, with the goal of also being “engaged” by the end of her journey.

She strikes a connection with the unwilling Mr. Henry Nobley and the two share good times, laughs and deep conversations. But when he tries to tell her how he fells at the ball, she tells him that it won’t do, she doesn’t want an actor, she wants the real deal, and she runs off to Martin.

Next day, all prepared to leave, Jane learns that her assigned man was Martin all along, Henry was just supposed to keep another girl busy until her man arrived. Martin tries, badly, to explain himself, with no explanation possible because he is an actor just like all of them. Henry tries to tell her that he is not, that he truly likes her. She doesn’t want any of it and flies back to the states, where she de-Austen her bedroom.

Soon after, however, Henry visits her. He explains that his aunt asked him to help her out in Austenland, that in reality he’s a history professor and that he to believes that that time was a better time, because love was simple. Obviously, the two end up together.

The movie is quite entertaining. Jennifer Coolidge and Georgia King‘s fake British accents are enough to take a few laughs out of you. Mostly, it’s a different kind of love triangle, and different is good. Also, is it just me or JJ Feild could be Tom Hiddleston’s older brother?