The 9th season of Criminal Minds came to an end yesterday, and I have to say that this was probably my favorite season to date, and the last couple of episodes just blew my mind!

The team goes to investigate the murder of 3 prostitutes, only to find themselves amidst a coverup and a rogue and corrupt police force. It’s an amazing couple of episodes, with a lot of great guest stars, a few things you will not see coming and a lot of bullets! Everyone’s life is at stake! That said, Reid is shot in the neck, Morgan is shot 2 times in his vest and one time in his arm, Hotch gets punched around and JJ and Garcia both save the day (on different places)!

This is an example of this that are not OK and that the show should never, ever, do again:

Spencer Reid almost dying is not OK, ever! Please never do this again… not my precious pretty boy…

That said, Reid ending up in the hospital allowed Garcia to be an awesome friend, and adorned his hospital room with Doctor Who related things: 2 little Daleks and the 10th and 11th Doctor figurines.

After this, Blake and Rossi have an amazing exchange, where Rossi tells her about a supposedly good day, that ended up being the worst day, because he was so focused on work that his wife left him. This, after Reid’s shooting, leaves her wondering.

Then Garcia saved the day, by saving Reid and shooting a bad guy… the look of panic in her face was priceless! 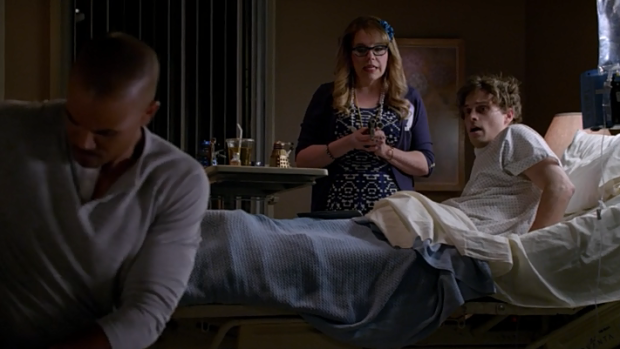 They manage to take down the corrupt cop and his operation and they all return home. Blake takes Reid home and explains to him that her son died at the age of 9, of an unknown neurologic disorder, and that it still haunts her, and he, Ethan, would have grown up to be just like Reid. She leaves, leaving behind her FBI credentials… Goodbye Alex Blake, I will miss you! I liked you even more than Prentiss…

We must be willing to get rid of the life we’ve planned so as to have the life that is waiting for us. – Joseph Campbell