Marvel’s Agent Carter’s last episode of the first season aired just a few days ago and I already miss it.

I don’t need a congressional honor. I don’t need Agent Thompson’s approval or the president’s. I know my value. Anyone else’s opinion doesn’t really matter.

To sum things up quickly, Peggy fought Dottie and barely won, then she had to convince an hypnotized Howard Stark to turn his plane around, because he wasn’t on a mission to recover Steve, and so, she had to let go of Steve (twice)… (Tears…), then Sousa saved Thompson (amazingly, might I add) and they arrested Ivchenko. Jarvis gave Peggy the vial of Steve’s blood (that Howard had stolen again from the SSR), thus showing his loyalty to her. Howard Stark lent his house (one of them) to Peggy and Angie to live in – given that their living arrangements and work conditions were shredded thanks to him… to which Angie was super happy about (I could see them having a fling in the future, if they eventually meet). Back at the SSR, Peggy finally gets the recognition she deserves, but Thompson (to my great disappointment) get all the credit for the mission, not even mentioning the fact that it was Peggy who saved the day… Sousa is outraged, but Carter assures him that she needs no one’s approval, she knows what she’s worth! Poor Sousa then asks her out for a drink, to which she says no, she has something to do, but her smile when he’s not looking tells me that he might just have hope and that leaves me super HAPPY!!! I ship them, haven’t I mentioned it before?! 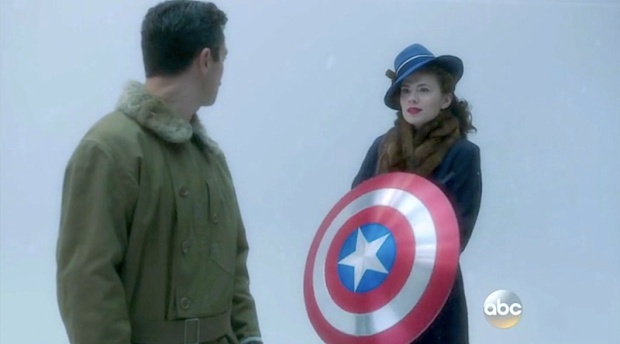 (Doesn’t she look nice?! With the shield and everything?!)

Hayley Atwell was magnificent during this 8 episodes. The range of emotions and abilities that she displayed was amazing. The last scene where she finally lets go of Steve Rogers broke my heart (and tears came again…).

Dominic Cooper is just perfect as Howard Stark! He makes Howard impossible to hate – no matter how much you know you should! One of my favorite moments in this episode was Thompson speech about Stark, where Stark just says the most outrageous things and you can’t help but totally swoon over him… Like father, like son!

It has been 8 weeks of watching James D’Arcy in completely different shows and roles. Man, that guy can act! Whether he’s playing murderous and creepy Lee (Broadchurch) or nice, funny and loyal Jarvis (Marvel’s Agent Carter), he’s just amazing! Jarvis is definitely one of my favorite characters in TV.

I absolutely loved this show, there was not a bad or dull episode, and the story was interesting and kept me hooked. Given that they joined now Ivchenko with Zola, I hope they show what that collaboration might lead.

I desperately want a second season! I think a short season of 8-12 episodes would be ideal, since they still have much to tell between this point and the establishment of SHIELD. ABC, please, please, please, bring Agent Carter back!