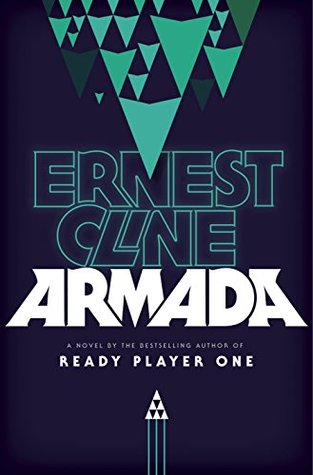 But hey, there’s nothing wrong with a little escapism, right? After all, Zack tells himself, he knows the difference between fantasy and reality. He knows that here in the real world, aimless teenage gamers with anger issues don’t get chosen to save the universe.

And then he sees the flying saucer.

Even stranger, the alien ship he’s staring at is straight out of the videogame he plays every night, a hugely popular online flight simulator called Armada—in which gamers just happen to be protecting the earth from alien invaders.

No, Zack hasn’t lost his mind. As impossible as it seems, what he’s seeing is all too real. And his skills—as well as those of millions of gamers across the world—are going to be needed to save the earth from what’s about to befall it.

It’s Zack’s chance, at last, to play the hero. But even through the terror and exhilaration, he can’t help thinking back to all those science-fiction stories he grew up with, and wondering: Doesn’t something about this scenario seem a little…familiar?

At once gleefully embracing and brilliantly subverting science-fiction conventions as only Ernest Cline could, Armada is a rollicking, surprising thriller, a classic coming of age adventure, and an alien invasion tale like nothing you’ve ever read before—one whose every page is infused with the pop-culture savvy that has helped make Ready Player One a phenomenon.

I received this book from the publisher through Blogging for Books in exchange for an honest review.

First off, I would like to let you guys know that I haven’t read Ready Player One yet. I’ve noticed that some people had a lot of problems with this book, due to their high expectations following Ready Player One, I had so such problem.

I quite enjoyed this book, it had me laughing and wanting to know what would come next, so I label it a success in my book. It isn’t, however, my kind of book, but I still enjoyed it a great deal.

I found Zack, the main character, pretty relatable in some things and highly likable. Unfortunately, due to the short length of time of this novel – roughly 2 days – the other characters were not fleshed out at all, with a couple of momentaneous exceptions (that you’ll have to read, because SPOILERS!). So, to be honest, I was only invested in Zack’s life really.

Although I’m not a gamer, or a HUGE Sci-Fi nerd, I really enjoyed all the references and thought that the premise was well engineered. The idea that the government has been supporting movies, shows and video games that simulate real life in order to prepare the human race for an upcoming invasion, it’s smart and I thought it was well done. The explanation for all the Sci-Fi tropes made sense, and I couldn’t help but laugh.

The main problem I had with this book was the predictability, though it managed to throw me off a bit by the end. I liked the ending, but it was sort of open and I would like to read more about what comes next.

Although not my favorite book of the year, it was still a good read.