Welcome again, to another week of Wandering About. This time, I’ll tell you about my second time in the USA, and my first time in New York City in 2007 (I was there again a couple of years ago 🙂 ).

Let me tell you, New York is in my top 3 cities in the World! You know when you arrive somewhere and realize “this is a place I could see myself living in”? I got that feeling with just a few cities so far, and my Top 3 is: London, New York and San Francisco.

I went there in 2007 for yet another of my mom’s work conferences. But this time it was an all girls kind of thing, with my sister and my “sister” coming with us. (by “sister” I mean one of my mom’s business associates that looks more like my mother than me and my real sister, and she’s kind of a big sister to us). This trip actually began in Miami, then Orlando, then Atlanta and finally New York, but I’ll share the places in different posts, otherwise it would be too much.

View from the Empire State Building

My sister fell ill as soon as we got there, she might have had a stomach flu (I had one while in Atlanta), but she was missing her husband pretty bad by then, and that certainly didn’t help. So while me, mom and big sis were touring around the city, my real sister spent most of her time in the hotel room… what a shame. She tried, poor thing, but then we had to disembark a double decker so she could throw up in Central Park… very glamorous.

We ended up having one of the worst plane rides ever on our way to Portugal, that was not so much fun.

I really love New York. I love that I could walk all over Manhattan, that there was a Starbucks in every corner. Fifth Avenue and Central Park. Broadway and oh, the shows!!! That time we saw Mary Poppins and Chicago, the first one is amazing, people flying and everything, but Chicago was a let down, and I have to say that I think that the movie works way better.

The city has a life of it’s own, like everyone there walks with a purpose… I don’t even know how to explain it…

New York City makes me happy! So tell me, have you been to NYC? Do you like it?

–  My Queen of Shadows has left the building and won’t arrive until September 7! =/ –

I was searching for something the other day and came across this brilliant Tumblr post with a lot of facts and information about Sarah J. Maas, her books, her upcoming books, etc. This list is NOT MINE! I repeat, it is NOT MINE! I found it of HERE. But given that I can’t reblog Tumblr posts to WordPress, here it is. If you have Tumblr, make sure to visit the original post there, ok?

I will warn you, there will obviously be some kind of SPOILERS, though not that many plotwise. You can just skip the topics you don’t want to know about! 😉 (I will be making some comments of a few lines and those will be in pink).

EVERYTHING YOU MISSED AT THE #ACOTARPARTY

A Court of Thorns and Roses

How has August came to an end already?!

This month went by way too fast… WOW! So, once again, welcome back to my August Book Haul.

This month I bought very few books. I was amazed at myself really! But I ended up hauling a lot of them, mostly e-books, given that this was my first month in NetGalley and Edelweiss… So, without further ado, I present the physical books I got this month.

Funny haul, ah? I bought 3 traveling books for my upcoming trip to Seoul and Japan in October. The first two are for my mom’s collection – we always buy these and in truth, we just open them on the plane… Then I got A Geek in Japan, because I so fell in love with the concept of this book, and I’m a geek and I’ll be in Japan! 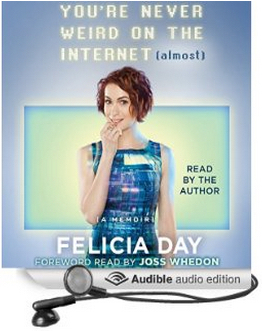 Then I got the amazing The Wrath and The Dawn by Renée Ahdieh and after reading Shatter Me, I couldn’t resist and bought the novellas, Unite Me by Tahereh Mafi, and I already read Destroy Me.

I also got the amazing audiobook of You’re Never Weird on the Internet (Almost) by Felicia Day.

Now the longer part… eBooks! I got my kindle on the first week of August, but I bought a few books even before I got it. The firsts (and so far only) books that I bought for my Kindle were: The Outlander Series 7-Book Bundle – Outlander, Dragonfly in Amber, Voyager, Drums of Autumn, The Fiery Cross, A Breath of Snow and Ashes and An Echo in the Bone. I want to get to this series eventually, but honestly I bought it because the price was too good to pass up… a little over 2$ for 7 HUGE books! It was a true steal, and I’m super happy about this buy.

Then I accumulated a few books from NetGalley, Blogging for Books and Edelweiss:

And that’s it for my August Book Haul! I’ll be doing my wrap-up tomorrow (probably) and my September TBR on Tuesday 😉 .