It’s Tuesday, September 8th, which means that it’s time for another Top Ten Tuesday, a weekly meme created by The Broke and the Bookish. This week’s theme is:  Finished Series I Have YET to Finish. The thing is, when I start a finish series, I’ll devour it pretty quickly and one book right after the other. So, there aren’t many finished series that I’ve started and have not finished yet. With that in mind, I’ll share the finish series that I want to start until the end of this year.

1. The Maze Runner by James Dashner

This is in fact the only finished series that I’ve started and have not finished… I’ve only read the first book yet. I will finish it though, I really want to…

I’m so so curious about this series…

3. The Grisha Trilogy by Leigh Bardugo

Same for this one, the only reason I haven’t bought it yet is because I haven’t found the 3 books at the same moment.

4. Percy Jackson and the Olympians by Rick Riordan

I do own the first 2 books for a while now, maybe  Christmas will me the right time to get into it.

5. Heroes of Olympus by Rick Riordan

This will follow, as soon as I finish the Percy Jackson series.

6. Daughter of Smoke and Bone by Laini Taylor

I already have the first book. I bought it super cheap for my kindle! This because I want the hardcover, which are beautiful and expensive. I’ll probably read it on my upcoming trip in October… lots of hours inside airplanes with my Kindle.

7. Penryn and the End of Days by Susan Ee

Much like the one above, I already own the first book in this series, and I’ll be reading it on my upcoming trip in October as well.

8. The Hobbit and The Lord of the Rings by J.R.R. Tolkien 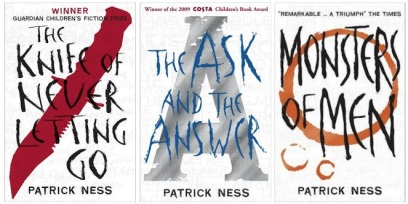 I’ve read so many great things about this trilogy that I need to check it out.

I’ve been curious about this series for a while, though I don’t know if it’s really my thing. It’s also on the bottom of my To Read List right now.