This week when I got home, I received my reward for crowdfunding the PHD Movie 2, that is, I received my DVDs of both movies, so naturally I wasted no time in watching the second one. If you have been paying attention here, you know that I’ve been pretty excited about this, right?

This second movie deals with 2 different main issues. From one hand, Cecilia (Alexandra Lockwood) needs to graduate ASAP, mainly because her advisor is leaving on sabbatical, so she deals with the problems of writing the thesis, procrastination, finding a thesis committee, managing all the conflicting schedules and ego issues, etc. On the other hand, Winston (Raj Katti) goes away with his group for his first field conference and has to deal with the pressure of doing better than the other groups and competing for funding.

I really liked this movie, though not as much as the first one. I did like the themes and the resolutions. I even cried! Winston’s collaboration with his rival lab to make an essential contribution to science moved me. But the high point of the movie for me was watching real footage of Alexandra Lockwood’s graduation! Yes, she is already a PhD! 😀

My biggest problem with this movie was the time frame. Essentially everything happens within a week or so, so while Winston is away at the super long conference, Cecilia realizes that she has to write a thesis, she actually writes it with several corrections from her professor, finds a committee and a date, defends her thesis AND has a graduation ceremony… in the meanwhile the conference is still going on. I didn’t like that! It’s the most unreal thing ever that they’ve done in the movies or comics…

It still left me pretty emotional… 😥 Oh, and I totally saw that ending coming… after how the first movie ended, I thought it was pretty obvious! 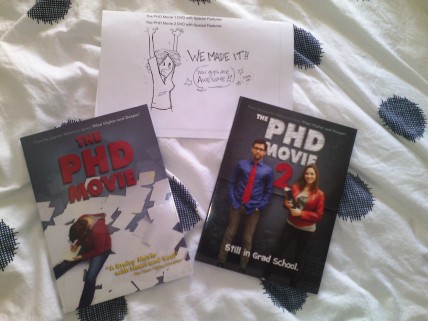