OOOOHHHH, it has been one month and a half since the last time I did one of these *hides in the corner in shame* – I’m so sorry! I had promised I would do this once a month, and this month just started to get away from me… But I’m here now, so I’m gonna go ahead and list some Tiny Moments of Pleasure that happened in my life since I last posted this, ok? The Weekly Small Pleasures is a weekly feature created by A New Life Wandering.

I don’t think I can start this post any other way. If you’ve been following me for at least one month, you know that at the end of October I went to South Korea and Japan for about 2 weeks. You’ll know this, because I could talk of nothing else for a long while. I loved it so so much. Japan is one of those places where I felt whole, and I think that’s such a unique feeling. 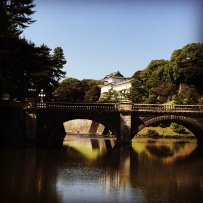 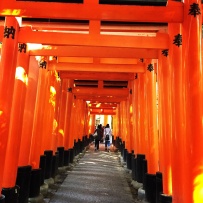 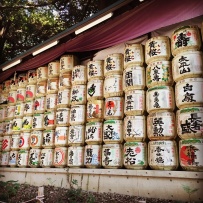 Along with being in Japan, came the amazing food. AMAZING! However, since I’ve been back, I’ve been to Japanese restaurants at least once a week, it’s not the same, but it calms my japanese needs somehow.

This list almost seems like an ode to Japan… Yes, I got highly addicted to anything Matcha: matcha, matcha iced latte, matcha kit kat, matcha cakes, …, you name it!

Autumn is my favorite time of the year! The cold, the orange all around, being able to wear sweaters… it’s just so good. Though the fall here is taking a while to settle… yesterday it was around 21ºC and that is still to hot! But it’s cold in the morning and I’m wearing scarves at least 😀 .

If you’ve been paying attention, you know by now that I don’t make friends easily, like, not at all. Before I came back from my trip, I had hardly shared 10 words with my roommates. But then I got back and realized I had a new roommate, much to my horror, it’s an older man, and when I say older, it’s a lot older than any of us… that’s just incredible weird! Luckily, a couple days later, another roommate arrived, a girl who shares my love of traveling, and me, her and the other guy (not the older man), ended up bonding over the awkwardness that is having him here, and we now talk almost daily and share food and stuff… it’s nice.

I had missed baking, so much! Although, this can hardly be considered real baking, but I’ll take what I can get! I bought a cake mix yesterday because I was in need of a cake! So, apple cake it was 😀 .

7. Books, books and some more books

I’ve read a total of 17 books since my last Tiny Pleasures post. That’s a lot! 😀 I’ve been neglecting my TV shows, but my books have been worth it.

I think I might love twitter… I’m hardly on facebook anymore, and the only reason things even get published there is because I have all my social media linked… But twitter… oh man!! Between group DMs and constant chats with some users, I spend a lot of time there.

I was so happy when I got a package from Kat @Life and Other Disasters! She sent me a Doctor Who postcard and a Downton Abbey Christmas Stocking, that unfortunately I can’t show you guys, because it’s all in Portugal and I only saw it though Skype :D. But it made my day! Thanks so much Kat!

10. Finally up to date with some shows

As I said above, I’ve been neglecting most of my TV Shows. I’ve managed to get some up to date, so I’m happy about those. The Daily Show, The Big Bang Theory, Last Week Tonight, Brooklyn Nine-Nine, Criminal Minds, iZombie and Sleepy Hollow  😀 😀 . I even managed to start on Law & Order SVU, and oh boy, I’d missed it so much.