End of Days is the explosive conclusion to Susan Ee’s bestselling Penryn & the End of Days trilogy.

After a daring escape from the angels, Penryn and Raffe are on the run. They’re both desperate to find a doctor who can reverse the twisted changes inflicted by the angels on Raffe and Penryn’s sister. As they set off in search of answers, a startling revelation about Raffe’s past unleashes dark forces that threaten them all.

When the angels release an apocalyptic nightmare onto humans, both sides are set on a path toward war. As unlikely alliances form and strategies shift, who will emerge victorious? Forced to pick sides in the fight for control of the earthly realm, Raffe and Penryn must choose: Their own kind, or each other?

I can’t believe that this trilogy has ended… why oh why?! I needed at least 3 more books… heck, right now, I would be super happy if we could get a short novella about Penryn and Raffe and how they’re adjusting to everything. And maybe another novella about his Watchers… maybe even a novella per Watcher, huh? Wouldn’t that be something?

Do you guys have any idea what I’m talking about here? If no, it’s probably because you haven’t read this trilogy, and maybe you should leave, because I will probably throw in some SPOILERS about the first two books, and one or two about this one. 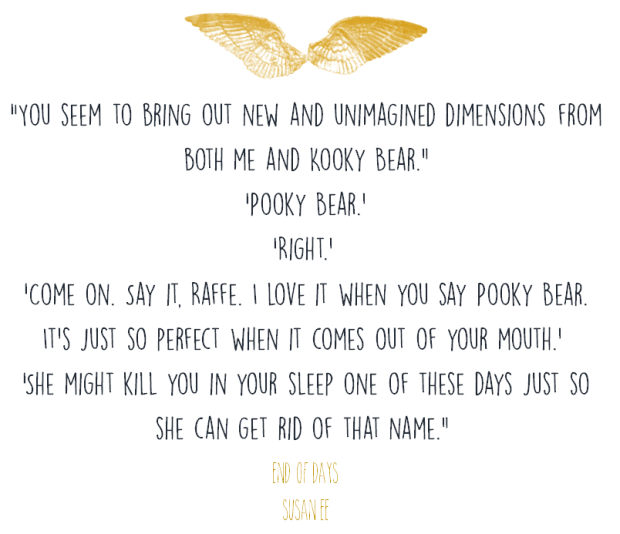 All things considering I loved this book, the plot was great and the action was out of this world. Penryn keeps on getting more and more badass, becoming truly Raffe’s equal in this book. Raffe finally opens up a bit, and the appearance of his Watchers sheds some lights into what he has endured during his time on Earth. They also help him see some things more clearly.

The romance was freaking amazing!!! While in book 1 there was all about denial and book 2 was mostly about distance, this one is about them admitting their feelings, even though Raffe thinks he won’t ever act on them. Penryn becomes bolder, and teases him relentlessly, and Raffe ends up giving in quite a few times… OMFG, I had to read chapter 5 a few times before it totally sunk in. And God, Raffe says the most romantic things, I was there swooning for the guy the whole time.

*swoon* YES, he truly went there and told her she should find a pig farmer… oh Raffe…

And then… oh yeah, he would be the best freaking pig farmer EVER, for her!

The only part of the book that felt a bit slower was when the humans were organizing to fight the Angels, maybe because I didn’t like that Penryn was doubting Raffe so much, although I totally understood why she did, but this guy had refused to kill humans before… I don’t know, it made my heart hurt that she was doubting him. And then, when the Angels get to the battle and the Humans win, I would have liked to see more detailed what happened next… the last chapters were a bit rushed, and I wish we had not only more details, but also more closure. But OMG, that battle was epic! And the sacrifice?! OMG!!! I couldn’t believe it, after 3 books trying to be whole, he did what he did… oh my… 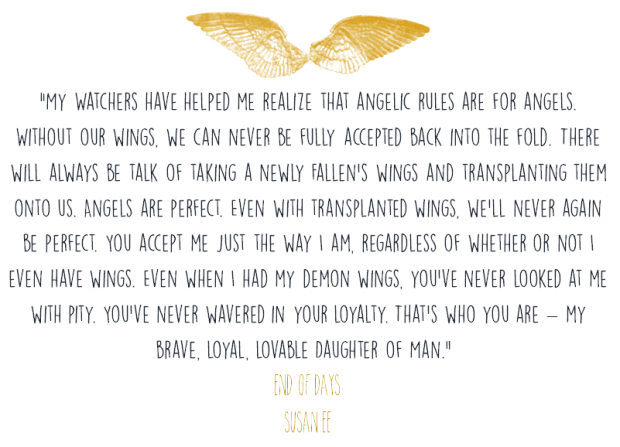 I have a few unanswered questions, and I can’t believe this was the last book! I mean, how the hell did Penryn’s mom knew about the rotten eggs? What happened to all the locusts? Will Paige command them all? What about the Watchers? How are they settling in? Are they staying with Raffe? Is Raffe living with Penryn? See?! I need one more book!!!!

I already miss this series so much!!!