Scotty Williams is the nerdiest 17-year-old at UK-based Havensdale College – and proud of it. However being a nerd can have its downsides, particularly when you’re constantly being targeted by the school bully Taylor Raven and his cronies.

As Scotty tries to navigate his final college years with the aid of his best friend Olive, he also finds himself on the radar of the mysterious and intimidating Vincent Hunter, toughest guy in the Sixth Form. Is Vincent really as bad as he seems? Will Scotty’s darkest secret ever be revealed? Can he ever just finish his last few college years in peace? But most importantly… will any guy ever find the reasons to love a nerd like him?

I didn’t know exactly what I was expecting from this book, but this was not it! And that’s a good thing, oh, such a good thing. I will admit that it took me a bit to actually understand where I stood in the story, not being familiar at all with the british school system, it took me a while. It was also a challenge to familiarize myself with all the british slur and that kind of stuff, but I got there 😉 .

The writing is pretty impressive, it really surprised me how easily I ended up going through the 500+ pages of this book.

I really liked most of the characters. Scotty was pretty amazing, in all of his imperfections. I loved that he was who he was and that he was sure and confided in his own skin. And even if I wanted to bludge his head with something for most of the time, I do understand why he did what he did, and why he kept all the secrets. Ollie got on my nerves sometimes, mostly because she fluctuated too much between being too much of a grown-up and too much of a kid, and I had a really hard time pegging her as a 17 yo. She was a great friend to Scotty though, and I appreciated how their friendship was built.

I absolutely loved Vincent and I was swooning for the guy most of the time. His relationship with Scotty was kind of perfect and I really loved that he didn’t really care about what people thought. While with his best-friend, Alexis, I had a similar problem as with Ollie: I liked her, but she got on my nerves sometimes… her reaction to what her interpretation of the truth was was awful, she didn’t even think about things before she started to bully Scotty, it was just not right at all.

Now for the bully, Taylor, it really took me surprise the real reason why he did what he did, and even after I knew it, and I kind of understood it, his cold reactions and violent behaviour while they were alone still baffled me a bit. I did like his ending, and I’m kind of curious to read his story 🙂 .

I really liked the plot and all its elements, but I do think that the book could have been shortened. As much as I liked seeing Scotty and Vincent’s relationship blossom, I do think it could have come a little faster. The same with their fallout, it was bound to happen, and it was terrible – my heart was hurting all that time – but it could have come and been resolved faster.

I obviously liked the ending, though the fact that Scotty and Vincent not only forgave, but became friends with Taylor kind of put me off. I understand the forgiving part, and I applaud it, but hanging out with the guy that bullied you for over a year… I don’t know…

Also, I applaud that Becky Jerams was bold enough not only to include sex in the novel, but to include explicit M/M sex. I APPLAUD YOU! 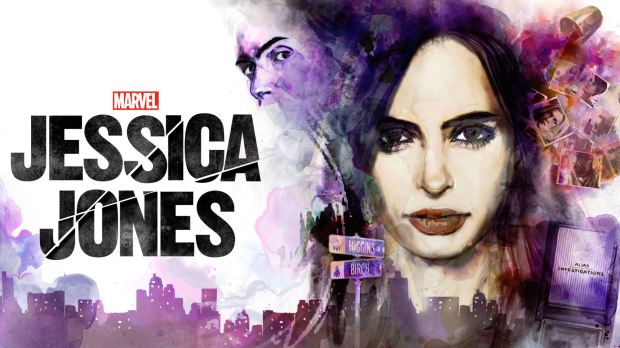 I’ve finished Marvel’s Jessica Jones over a week ago, and I think I’m still recovering from it, because the show is just AWESOME!

I won’t go into a deep review of of season, first because you should really watch it without a preconceived notion of what’s going on, because it will BLOW YOUR MIND. And secondly, because I don’t want to review this show, I just want to gush about it. Is that alright?

I loved Daredevil, but I think that Jessica Jones was able to be even darker and grittier. It has less blood and fights than DD did, but its emotional punch is way fiercer. This is the kind of show that will make you truly uncomfortable, and it will make you sick, and you won’t be able to get your eyes off of it.

The acting is overall brilliant. ALL of the actors did amazing things with their characters, truly people, ALL OF THEM. But for me Krysten Ritter, David Tennant and Mike Colter, as Jessica, Kilgrave and Luke Cage respectively, just blew everything out of the park. I was always a huge fan of Krysten Ritter, but she’s just beyond amazing in her role as Jessica Jones. You just watch and you’ll see what I mean.

But David Tennant… WTFH???!!! Let me get this out of the way: Tennant is MY DOCTOR and he’s also one of my biggest celebrity crushes… but I was terrified of him in this series. Kilgrave is one of the worst (and best) villains in the MARVEL universe, and Tennant just did an amazing thing with it. He played it so perfectly that I was cringing and I was having difficulty to separate the man from the character (and that was never a problem before). Suddenly, I couldn’t conjure up an image of sweet and smiley David Tennant… oh no, all I could see was maniac Kilgrave! (and to make matters worst, he used his Doctor accent for the role, and he even gave one of my favorites “WELL…” and I died a little!)

Mike Colter was a really great surprise to me. I knew nothing about his character Luke Cage (other than he’s Jessica Jones romantic interest), but his interpretation of Luke made me super interested and super excited for his show to premiere.

I really liked the plot. Like Daredevil, it’s a bit concentrated on its repercussions – nothing huge like cities falling from the sky. But Jessica Jones is more personal, and with a bit higher stakes for all the emotional things involved. I liked it. A LOT! I hope there’s a season 2, because I need to see what happens next.

Have you seen JJ yet? What did you think? Did David Tennant scare the shit out of you too?

Hello my lovely people! It is Feature with Followers time!!

Feature with Followers is a weekly meme posted by JBelkBooks (me) where I will be showcasing one of my AMAZING followers. This gives me an opportunity to really get to know them and give them an opportunity to get their blogs out there in the community. The way I choose my featured follower is Top Secret, so wait for your chance to be featured!

I am excited to share my first follower this month. As you all know, this is the last month of 2015, but I WILL be continuing this post into 2016. So stay tuned for your chance! However, I am planning to try and post a FWF post every weekend since it is December. Anyways, here are some hints on who this wonderful person could be: