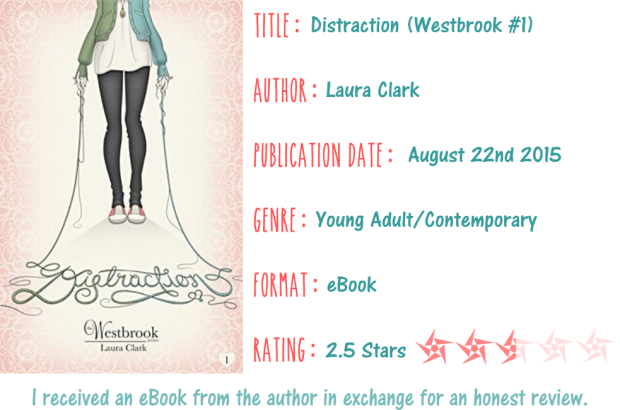 Seventeen-near-old, Laila Patterson, would never describe her heart as fickle. She understands the difference between reality and fantasy, which is why Sam Woodson is not realistic boyfriend material. After all, he is in college, and college boys simply do not date high school girls. Plus, he is Laila’s older brother’s best friend. According to the unspoken bro-code, messing around with your friend’s little sister is pretty high on the list of forbidden taboos.

What happens when Laila discovers that her secret crush on Sam isn’t quite so one-sided? What if the only way to keep him is to keep their relationship hush-hush? Is Sam worth all of the lying and sneaking around?

Laila doesn’t want or need this unexpected distraction. . . or does she?

First I would like to thank the author, Laura Clark, for contacting me to review her book. Secondly, I really love this cover, it’s just gorgeous. Unfortunately the book did not fully work for me.

I’ll start with the positive. I’ve mention that I love the cover, and I’ll say it again, the cover is simply gorgeous, and I would pick up this book any time based only on that. I also like the premise of the book and I was curious to see how the relationship between Laila and Sam would develop. The story, mainly between the both of them was mostly cute, and I wanted to see more of that, but it ended way too soon.

Now, a lot of things didn’t quite work for me =/, and one of those things was the writing… I found it too descriptive, derivative and repetitive. In my opinion, this book need some serious editing. I found Laila to be a terrible narrator, she would rant about the most random things within her main narrative, and grrr, it was frustrating. Other thing within the writing that made me cringe was the abuse of italics. Just no!

This wouldn’t have mattered if I had actually liked Laia, which I just didn’t. I actually believe that you can be in love or in lust with more than one person, but Laila was never fully into her relationship with Sam, except for the rare moments they were truly alone together, otherwise she would spend more time thinking about Trevor than actually considering her boyfriend. I think that it would have been more convincing if both boys wouldn’t have appeared in her life at the same time…

For the most part, I actually liked Sam, though this book doesn’t gives us a clear picture of him or the situation given its abrupt end. I understand Sam’s actions, the only thing I don’t truly understand is the whole of his feelings for her. I do think that Laila was extremely childish in her reactions to the situations, but maybe my 16 yo self would understand that. I also liked Trevor, except for the Avery part, I’m still not sure how I feel about that.

Back to Laila… grrrr… OMG, she’s so frustrating. I understand some stuff, but flirting with your best friend’s possible boyfriend, while she’s in the same room as you? NO! Laila was a bad friend and she wasn’t a good girlfriend. I was just so irritated with her for most of the book.

One thing I didn’t really like was how fast Laila and Sam’s relationship developed, especially after she asked him to go slow and he promised he would… suddenly, bikini tops were flying and they were once again in full make out mode on her bed, partially undressed… *sigh*

I also hated that ending. The book ended too abruptly, nothing gets resolved in this book and in the end, nothing really happens in it, except for the beginning and end of Laila and Sam’s relationship, and the beginning of a friendship between Trevor and Laila. We never know what’s in the letter Sam wrote to her, though I understood why he broke up with her and never thought he needed to explain further. I also felt that she was a bit unfair to Sam, given that she never actually told him what she wanted, and that he was right in breaking up with her… actually, I’m not sure he should even have begun something…

We never really get what’s going on with Kyle and Avery, though I suspect that they’ll end up together, and what about Georgia? I like series and books that will compel you to pick up the next book in the series, but this ending was just too much (or not enough).

Even though this book just really wasn’t for me, I’m kind of curious to read the next two, because I need to know what the hell happens. Given that this series has 3 books, I suspect that it will be only in the third book that anything really gets resolved, and probably something will happen between Laila and Trevor in book 2… either way, I’ll probably have to give it a go. I just need to know…