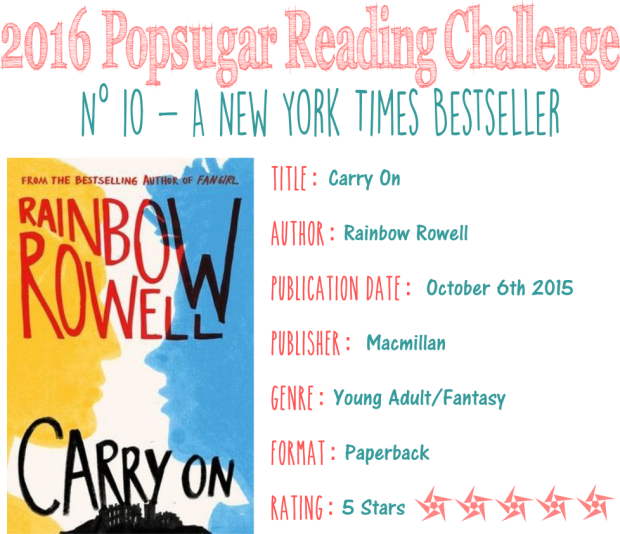 Simon Snow just wants to relax and savor his last year at the Watford School of Magicks, but no one will let him. His girlfriend broke up with him, his best friend is a pest, and his mentor keeps trying to hide him away in the mountains where maybe he’ll be safe. Simon can’t even enjoy the fact that his roommate and longtime nemesis is missing, because he can’t stop worrying about the evil git. Plus there are ghosts. And vampires. And actual evil things trying to shut Simon down. When you’re the most powerful magician the world has ever known, you never get to relax and savor anything.

Carry On is a ghost story, a love story, a mystery and a melodrama. It has just as much kissing and talking as you’d expect from a Rainbow Rowell story — but far, far more monsters.

Now I understand why Katytastic read this book a few times in a row, and why so many people were raving about Carry On, because this book is just freaking amazing!!!

I wasn’t the biggest fan of the Simon Snow bits of Fangirl, so while I was excited for this book, I was facing it as something totally new and independent from that one, because, to be honest, I didn’t retain much of it from Fangirl.  But Carry On made me love most of the characters right away, and I was sucked in from the first pages.

I’ve said it repeatedly: Rainbow Rowell is a genious! Not only is her writing style fabulous and funny, but she creates the best characters. I loved everyone! Ok, maybe I loved a couple of characters a little less than others, but I loved Simon and Baz and Penelope and Fiona and I could totally empathize with Agatha, though she wasn’t my favorite. And they’re all funny as hell!

I found the World Building fantastic! The idea behind it was pure genius. The concept of the power of words is pretty great, but what I loved the most was the fact that despite the existence of magic, they still used cars and phones and went to normal school and universities. I liked that they wore normal clothes and talked about manicures. This book felt normal in the most magical way! I really loved how our everyday stuff has a place in the magickal world of Carry On, and I’m with you Agatha, why use magic if you have tape, right?

Even though this is supposed to be the 7th year of school, and there have been 6 years of adventures before, I was never lost and I really liked the references to all those other times, and the relationships between all the characters was super well explained. And OMG, BAZ!!! ❤ ❤ ❤

Should we talk about the romance? I mean, it’s not really a spoiler, right? Simon and Baz are almost kissing on the cover, ok?

So, yeah, the romance… 😍❤😍❤ It’s so heartwarming and cute and my heart felt like it was going to explode and I never wanted it to end! Baz and Simon are totally OTP and I could read a whole book with just the two of them spending time together :D.

The book was fast paced and I really liked how the various elements of the plot came together in one big plot. The only thing I would have liked would be for the gang to actually find out the whole truth about everything. We, as readers, get to find out, but the guys don’t. But that ok, I guess, they CARRY ON just fine :D.

Now I want to read Fangirl to appreciate the characters a lot more than I did the first time… 😀 And do yourself a favor, and read it now!!!