One girl’s heart gets rocked to the core in the first novel in this sexy New Adult series.

Twenty-one-year-old front girl Emmylou knows that getting her band noticed in the ‘90s indie rock scene will be no easy task. She definitely knows better than to break the number one rule of the band: Don’t sleep with your bandmates! But after she ends up having the best sex of her life with her guitarist, Travis, she finds following that rule is a lot harder than it sounds.

When the band gets the gig of their dreams, making it big seems just within reach. But Emmy’s inability to keep her hands off Travis threatens everything they’ve worked for. Can Emmy find a way to break the rules and not blow the chance of a lifetime?

I’ll start this review by saying that I never read a book quite like this one. Yes, it’s a new adult romance novel, and I’ve read plenty of that, and yes, it involves musicians, and I’ve read my fair share of those as well, but this book stands out completely. Why? Well, it’s the writing style!

I’ll admit that it took me a few chapters to be 100% used to the writing, but once I was, I just wanted more. This book is told in the first person, present tense, but in a way that seems like she’s talking directly to you, with snide remarks and everything. Emmy’s voice is also a rambler, which means that there are really long paragraphs with very little punctuation – rambling style – and while at times it was a bit difficult to read, it sure as hell was fun.

Emmy is not the most likable character, although I understood her hesitations most of the times, it was just too much. At some point I just wanted to club her on the head and make her see the light!

Travis on the other hand is probably my favorite male musician from every book I’ve read, because he’s not the bad boy… not at all! He’s pale and blond and thin and he knows very well how he feels for Emmy and he knows that he needs more than what she believes she can give him.

The romance was fun and hot and it felt real. I loved reading everything that went on Emmy’s head when she was thinking about Travis, which was all the time! It was just so damn cute!!! But one thing that stands out in this book are the friendships. I absolutely loved how everyone was so supportive of each other, within the same band and betweens bands. It’s a totally different outtake on the music scene. 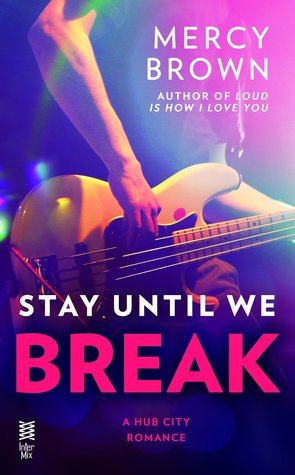 This book is just hilarious, the situations these characters get into to and how they get out of them it’s too much :D, I was laughing out loud at 3 a.m. :D.

I’ll definitly read the next book in the series, about Cole (bass player) and Sonia (Emmy’s BFF), because I’ve read the first chapter and I just need more and June is so damn far away… 😀 😀 😀 (click on the cover to go to the goodreads page).

Last week my song was from a portuguese band, and this week it is by a Danish soul pop band. Wow… how diverse! I will be honest and say that I’d never heard of Lukas Graham until I caught their song 7 Years on the radio, and then I was hooked. I obviously had to listen to the whole album, and then Happy Home became my obsession. It’s just such a gorgeous music!!!