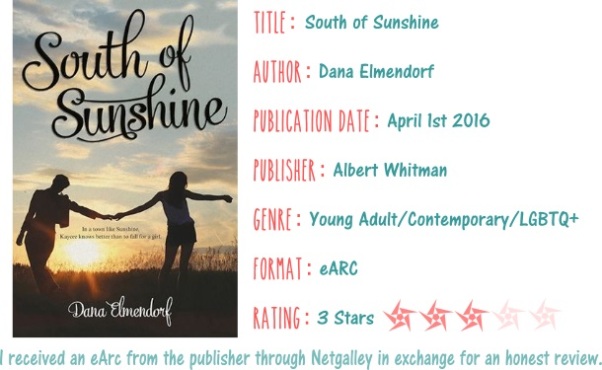 What is Kaycee willing to risk for the sake of love?

And what will she risk for acceptance?

In Sunshine, Tennessee, the main event in town is Friday night football, the biggest party of the year is held in a field filled with pickup trucks, and church attendance is mandatory. For Kaycee Jean McCoy, life in Sunshine means dating guys she has no interest in, saying only “yes, ma’am” when the local bigots gossip at her mom’s cosmetics salon, and avoiding certain girls at all costs. Girls like Bren Dawson.

Unlike Kaycee, Bren doesn’t really conceal who she is. But as the cool, worldly new girl, nobody at school seems to give her any trouble. Maybe there’s no harm if Kaycee gets closer to her too, as long as she can keep that part of her life a secret, especially from her family and her best friend. But the more serious things get with Bren, the harder it is to hide from everyone else. Kaycee knows Sunshine has a darker side for people like her, and she’s risking everything for the chance to truly be herself.

A while back I was commenting with Kat that I hadn’t read any book about a F/F relationship. Yes, I read books that had lesbian relationships in the background, such as The Mortal Instruments or More Than Fashion, but I still hadn’t read one book where the F/F relationship took front and central. That’s why, when this book became available on Netgalley, I was super excited and requested it instantly. I had high hopes for it!

Unfortunately, despite the very strong issues touched on this book, and the occasional tear jerker moment, the most dominant feeling I had while reading it was: RAGE!

Yes, I was enraged for like 50% of this book. It didn’t feel good. I was messaging Cátia the whole time, and my most used expression was “WTF??!!“. I wanted to throw my phone away and yell at the skies and I even let out an occasional “OMG!” outloud and the occasional scream of frustration… yeah… this book was an experience, all right.

Let me first tell you a bit about the plot, because I feel like the blurb is not all that illuminating… Kaycee likes girls, she has liked girls since she can remember, she was never confused or in doubt, she is gay, she knows it, she just never admitted it to others or to herself. Her plan was to get through high school, have a few boyfriends, go to community college, save money and then get the hell away from Sunshine. Her plan was also never to tell a soul in her life about who she truly is, not even her mother. Then a new girl arrives at school and it’s a bit of instacrush… Kaycee can’t keep her eyes out of Bren, and Bren is also interested, but Bren has no problems with who she is, though she doesn’t flaunt it, she also doesn’t hide it.

Things get tricky as their relationship progresses. Kaycee being raised religious, is torn between her true self and what people at her small southern town and her church deems acceptable – that is: homosexuality is a NO NO! In a town that it’s socially and racially segregated, Kaycee is afraid, so she hides herself. Until her relationship with Bren comes out, that is, and Kaycee has to decide what is more important to her.

Now, see, isn’t that a good premise? I think it’s fabulous. My problem was the execution…

The writing took me a bit to get into, mainly because of the southern colloquialisms and expressions that I’m not familiar with. Eventually I kind of got used to it. But the pacing was slow, oh so slow, and honestly, after finishing it, I felt like the whole direction was a bit lacking.

I had a LOT of problems with Kaycee, our main character. I won’t even begin to understand how hard it is to come out of the closet in normal circumstances, much less in a small and small minded town, but I wanted to slap this girl in the face a few times… ok, many many times. I understood the fear, I swear I did, but her denial of herself and those who loved her hurt. The things she did and said to try to extricate herself from some situations was too hurtful and nonsensical. The fact that after an unpleasant situation, she turned the tables around and did the same to a person who was one of her best-friends was the worst.

In the end I felt like she grew a little, but not nearly enough, and her motivations weren’t the right ones. You should do things for YOU and not because you’re in love. Speaking of the romance, it was another thing I wasn’t totally sold on. I loved Bren, I just kept wishing that she would find someone better, because Kaycee didn’t treat her like she deserved.

I know that I live in a pretty idyllic place. It’s not that bullying and bigotry and so on doesn’t happen here, because it does, but definitly not in the dimension that is portrayed in this book. But some things that are said during this book totally turned my stomach around, because they’re just so wrong! I know this happens, I know it happens a lot and in a lot of places, but I don’t think that most of the book should have had this theme, where people said the most offensive things, and Kaycee or Van just went with them, because it was easier I guess… no, I didn’t like it at all. Some examples:

“You and your troublesome friends need to git your asses out of my theater. This ain’t no homosexual social club. You take your gay crap to California where all them other liberal hippies live. Law or no law, you’ll never be equal in my book. And you ought to be ashamed. You all disgust me. it ain’t normal, I tell ya. You gay people are destroying marriage and family values across the country. We don’t tolerate that around here.”

This is Kaycee’s BFF talking to her…

“I thought if you finally admitted you were gay, then somehow, I’d lose you. That I wouldn’t be able to be your friend because you’d hit on me or something, and then everybody would think I was gay too.”

This is the same BFF and one clueless dude…

“Just because they’re gay, doesn’t mean they all wear pink. Do they, Van?”

I mean, I can’t even! I think the themes treated in this book are so important, but unfortunately I don’t think the execution appealed to me at all. I was rooting for the characters simply for my sense of morals and right and wrong, and nothing more, because these weren’t likable characters. Ultimatly I managed to reach 3 stars of rating because of this, because this type of books ARE IMPORTANT and because this book made me feel (though not very good…).

Have you read South of Sunshine? Did you like it?