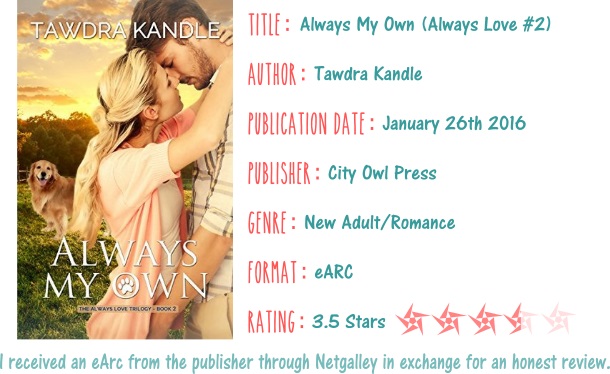 ***This is the rest of the story . . . what happened to Trent and Elizabeth after Underneath My Christmas Tree ended. ***

When Elizabeth Hudson and Trent Wagoner met on a Christmas tree lot in Florida, sparks flew, igniting a fire they both thought would burn for a long time.

The problem with fires is that sometimes people get hurt. In this case, both Elizabeth and Trent end up burnt when an impulsive decision results in long-term repercussions.

Trent, still dealing with the aftermath of a painful situation in his hometown of Burton, struggles with the feelings he has for Elizabeth. He’s not sure that committing to her is a good idea when everything he touches seems to end badly.

Elizabeth took a risk when she moved to Burton for Trent. Now she’s stuck in a job she’s not sure she likes, living with people she doesn’t know, in love with a man who may not be capable of the forever she craves.

When it seems as if hope has died . . . there’s always love.

This was my third book by Tawdra Kandle, and my second one in this new trilogy. I’ve previously read The Last One and Always For You, and the last one left me curious to Trent story, so I was happy to finally read about him. And I didn’t read their previous short story, but I didn’t miss it either, because the events that happened before are quite well explained throughout this book.

Like the other books in these series, the story takes place in the small town of Burton, and I really liked how all the previous people in the other books have important roles – I still need to read the last 2 books of The One Trilogy.

I really liked the writing on this one, I’ve been liking it more as the books go by. The only thing that I had a small problem with was the repetition. Several events and how they unfolded are mentioned several times, but they’re also described in detail several times, and I didn’t think that was needed. A thorough description once would have been enough, even if it was mentioned several times after.

The characters were interesting, especially Trent. Elizabeth had some depth to her, and she had a lot of character growth. Their romance is slightly different from the couples in the other books, since they start the book married already, and not sure they can find their way to each other again.

I liked the overall plot of them finding acceptance in each other and in others, given how the whole town treated Trent, but I wasn’t a huge fan of the ending.

In the end, I really enjoyed this book. I think that my favorite parts are seeing all the gang from the previous ones coming together 🙂 .