You know when you associate a certain music to a person or situation? I will always associate this one to a sad event in my life, but I absolutely love it.

Stay with me
Let’s just breathe

Stay with me
All I see 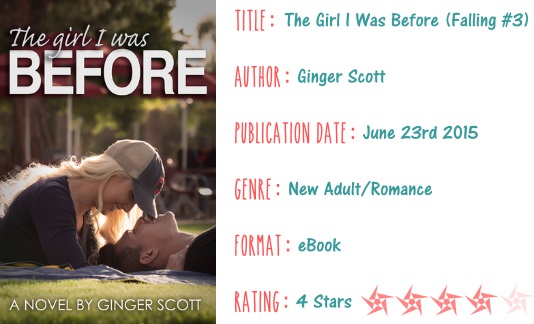 I’m the selfish one. I suppose that’s the nicest thing people say about me. I’ve heard the other things, too. “Paige Owens is a pretty girl with nothing else to offer. She’s just a good time at a party. She’s stupid, heartless, cold and useless. All she cares about is getting a guy to look at her. Why would anyone want to be her friend?”

Some of those things are true. Others were true. They’re all hurtful.

None of it matters.

I’m ready to become the girl Houston Orr sees when he looks at me.

Houston isn’t a star athlete. He doesn’t play in a band. He’s never going to be president, and his life is so far away from simple and easy it isn’t even funny. He wasn’t part of my plan. But I’m starting to think plans are overrated, and maybe our stories are what we make them. And mine depends entirely on me, and the choices I make…starting now.

Houston is my fairytale. He’s perfectly imperfect. He’s poetry and life. He’s truth and heartbreak, all rolled up in a tall body with dark hair, broad shoulders and green eyes that lull me into submission. He’s nothing I ever thought I wanted, but the very thing I need. He’s the only guy I’ve ever really loved, and he thinks I’m a princess. I fell into him, and now I’m holding on.

But sometimes life takes away our ability to choose. Sometimes…things aren’t in your control. Sometimes, it hurts to be selfless. My only hope is that when it comes time to choose, I get it right.

Welcome to my once upon a time and wish for happily ever after.

And again, I want to thank Deanna @A Novel Glimpse so much for lending me this book! Thank you! I loved reading this whole series. 😉

Let’s be honest, Paige is not painted in the brightest way in the two previous books, so I was a little bit afraid of how she would come across in her own book. I had read the following book, so I knew about her relationship with Casey, Houston’s BFF, and I liked it, so I was willing to give her a chance. In the end I liked her, but not as much as any of the other girls. Still, she grew on me, because she grew up a lot during these series, and she was strong as hell.

I really liked Houston, but hey, I liked him already going into this book, and the fact that Ty approved of him that much was a bonus – because Ty is awesome! I loved how he tried to balance everything in his life, and how unapologetic he was about it. He just had such a positive attitude, even through everything… amazing!

I liked how the romance progressed as well, and I really liked the involvement of Houston’s family and Cass, Rowe, Ty and Nathan. And guys and children are my weakness…

The plot progression still threw me off a little, and this book managed to surprise me… a lot. So, bonus points for that! Still, after reading the whole series, I felt like this book was probably the weakest of the bunch, though I still loved it.