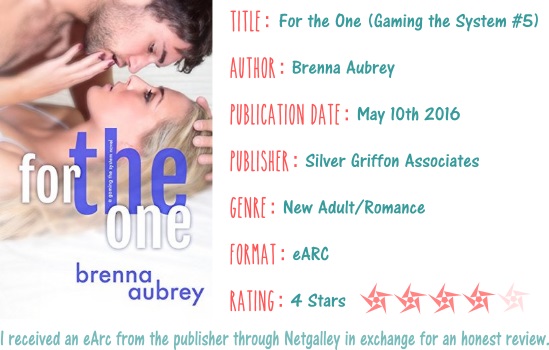 He’s got everything but game….

William Drake is an artistic genius with a photographic memory and the intensity to master practically any task. Oh, and he owns a chunk of a billion-dollar gaming company. A twenty-six year-old guy with his wealth, talent, and good looks shouldn’t have problems winning over women. Except he does. To be exact — and detail-obsessed William is always exact — he’s got problems with Jenna Kovac, the troubled beauty who has his heart working overtime and his tongue tied in knots.

And she can’t afford to lose.

Jenna Kovac is a survivor. When war ripped her world apart, she lost her family, her homeland, and her one true love. She’s made a new life for herself in the US, but she’s learned that nothing is permanent, and some nights it’s not even safe to dream. When a scumbag sells her future out from under her, suddenly the only man who can get it back is William Drake, geeky — but scorching-hot — social disaster. William must learn to stay cool under pressure for the all-important duel he’s about to fight. Unless she can teach him to loosen up, she’ll lose everything. Again.

But Jenna’s got a few things to learn from this irresistibly enigmatic man. As they spend time together, they’re soon exchanging long, slow kisses — and painful secrets. There’s so much more to William.

Something that might be worth taking one more risk…

Once again, I should mention that this was yet another buddy read with Cátia @The Girl Who Read Too Much, so go check her review of this book on her blog in the next few days.

I have to admire the awesomeness of this leading couple. It’s not everyday that I find books where the girl is a war refugee and the male MC has Aspergers! It’s unusual and refreshing and more than anything else, it’s relevant and important, so I really loved this aspect of the book and the diversity it brought.

Now onto the writing… this was my first book of Brenna Aubrey, and I’ll for sure check out the rest of the series, because the characters were interesting enough. The writing however was not without its flaws. I found it somewhat repetitive at times, and there was a lack of consistency in the verbal tenses, it would switch from the present to the past too often, and I ended up not understanding which tense it was supposed to be the right one. Apart from these issues, it was easy to read and follow. More importantly, Jenna and William’s voices were completely distinct, which was to be expected, but I really felt that it was super well done.

I really really liked both main characters. Jenna had a lot of baggage and a lot of things gone wrong in her young life, and although I sometimes thought that her view of things was a bit too much, I did understand her coping mechanism. William was such a breath of fresh air, it was so different to read his POV from all the other male POVs I read in NA romances. I really liked their connection and how they both made an effort to learn about the other, with Jenna helping William with his social anxieties, and William helping her deal with some of the aftereffects of the Bosnian War and so on. I really liked how William explained his view of the world to her, and Jenna, for her part, tried to addapt her speech and actions to make him more comfortable.

I really really liked their relationship and how it grew, but their fights were just too real! With William saying everything he thinks, they got tricky and my heart kind of hurt.

My only complaint about this book is the ending. I wish that there was more resolution to the story, instead the conflict was resolved fairly simply, and there wasn’t much a discussion or a moment afterwards that showed how they were working it. Instead we get the last chapter from Mia POV. Who is Mia? Well, if I had read the rest of the series, I would have probably been excited for this POV, given that she’s the MC of the first 3 books, but I haven’t, so I wasn’t. The last chapter brought nothing new or important, and it seemed to me that all the pertinent information could have been delivered with a POV from Jenna or William. I honestly thought it was the wrong move, though I do understand the need to set up the 6th book in the series. But still… I was not a fan of that.

In the end this was a very enjoyable read. I really loved all different elements that were brought to this book, I was a huge fan of the all Medieval reenactment they had going on there, but having an MC who was a war refugee and another who was autistic was definitly different and awesome, so I would highly recommend this book to anyone who is into a good New Adult romance.