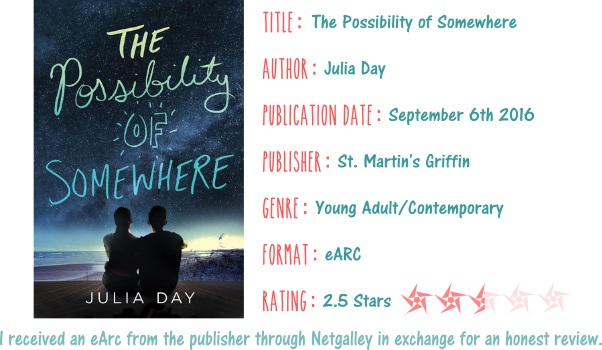 Together is somewhere they long to be.

Ash Gupta has a life full of possibility. His senior year is going exactly as he’s always wanted — he’s admired by his peers, enjoying his classes and getting the kind of grades that his wealthy, immigrant parents expect. There’s only one obstacle in Ash’s path: Eden Moore — the senior most likely to become class valedictorian. How could this unpopular, sharp-tongued girl from the wrong side of the tracks stand in his way?

All Eden’s ever wanted was a way out. Her perfect GPA should be enough to guarantee her a free ride to college — and an exit from her trailer-park existence for good. The last thing she needs is a bitter rivalry with Ash, who wants a prized scholarship for his own selfish reasons. Or so she thinks… When Eden ends up working with Ash on a class project, she discovers that the two have more in common than either of them could have imagined. They’re both in pursuit of a dream — one that feels within reach thanks to their new connection. But what does the future hold for two passionate souls from totally different worlds?

You guys shouldn’t be surprised by now, but I read this book as a buddy read with Cátia @The Girl Who Read Too Much, check her review of this book in the next few days.

I honestly don’t know what’s going on with me – or the books I’m reading – but I’ve been having loads of problems on my reads.

I’m gonna do this a little bit differently, and tell you guys what I liked and didn’t like about this book, ok?

So, I loved the kids! There are several kids around this story and they’re all pretty awesome. I loved them all, and the inclusion of a child in the autism spectrum. Kudos for that!

Another thing that I liked was the relationship between Eden, the female MC, and Marnie, her step-mom. I think it’s quite frequent for stepmom’s in books to be a bit misrepresented, being mostly distant from their step-sons/daughters, so I really liked that in this case Eden is closer to Marnie than her own blood parents. Their relationship is great (for the most part).

I liked that this was an interracial relationship, though I don’t think it was well done or well achieved, and that was a real shame.

I wasn’t a huge fan of the characters, I found huge faults in all of them, and that could have made them more human, but no, it was ridiculous and it just pissed me off. Eden was the best character for me, but Ash? I wanted to kick him most of the time! The way he treats Eden sometimes? NOT COOL!

The relationships. They weren’t good! Ash and Eden start being a couple out of nowhere, they go from barely talking enemies, to frienemies, to making out behind everyone’s backs…. I couldn’t see the sense in it. I didn’t feel the chemistry at all, and the romance didn’t convince me for even one moment. Then I also had an issue with the other relationships in this book. Eden and Mundy’s friendship develops way too fast, and even though I liked Eden and Marnie, I still hated what Marnie did at one point. Eden’t dad is not even worth mentioning.

I didn’t like the issues! I understand that racism is a problem, of course I do, I wasn’t born yesterday, but it was dealt here, it wasn’t good. And the “resolution”? What the hell?

At one point, there’s the implication that the only reason Eden received something, was because Ash kind of forfeited it, and I also disliked that a lot.

Unfortunately this book just didn’t do it for me, and I had a lot of issues with it. The only reason it gets a 2.5 from me, was because of the themes and their importance. This could have been an interest book, the plot had potential, but it just didn’t manage to be good.

6 thoughts on “The Possibility of Somewhere (Julia Day)”