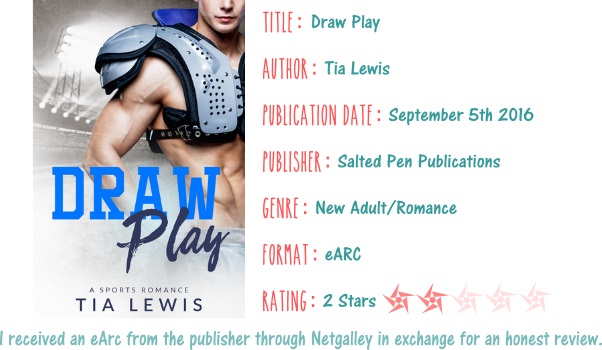 I can’t believe my coach assigned me a tutor. I’m all that on the field and between the sheets — who cares about my stupid grades?

But Claire doesn’t treat me like I’m dumb. When we’re not busy fighting, she actually encourages me. And with those sexy curves of hers, I know just how to thank her.

I hate football players, but I need the money. Jake is just as cocky and arrogant as the worst of them … but his touch sets me on fire.

I have to believe he’s different, that he won’t use me and break my heart. Because I can’t stop wanting him. I just hope I survive the ride.

A couple of days ago I came across this book on Netgalley and shared the link with Cátia. After seeing some reviews we came to the painful conclusion that maybe we wouldn’t like this one, because the reviews weren’t that stellar. She controlled herself, but I didn’t. I was in the mood for some college romance, so I thought “eh, it can’t be that bad, right?!“. Yeah… I shouldn’t really have requested it.

The writing and pacing of the book were OK. I saw the potential there. The problem – and this had more to do with the characters than the writing itself – but sometimes the language was just a bit too much, you know?

Now, I wasn’t a fan of either of the main characters, to be honest. Let’s start with Jake… I thought he had potential, with his horrible background and all, but he comes off as a bit jerk at the beginning, and that’s mainly because of the way he talks about women. At one point he calls some girls sluts, just because they are inhibited and like to get around… dude… you need to learn a lesson from Dean Di-Laurentis, because he knows that people are free to do what they feel like and should not be judged.

But I also had a huge problem with Claire, because she was so judgmental… all the freaking time! Either it was because joks can’t be smart, or every guy who plays football can’t be trusted, you get the drift, right?  It was too much. Also, she had a tendency to misinterpret EVERYTHING that would come out of Jake’s mouth… not good.

I didn’t feel the romance either =/. I saw the beginning of a good friendship, but then I thought things went a bit too fast, and I didn’t see them connecting as much as I thought they should. On another hand, I did like the conflict, and the fact that it wasn’t solved easily.

A few things that bothered me a lot in this book: the foul and demeaning language, the slut shaming, the fat shaming, the stereotyping. Also, I have to say that Claire cried a lot for my taste?! I feel bad writing this, because there is absolutely nothing wrong with crying whenever you want and feel the need to, but she got offended by the stupidest things, and she would start the waterworks… it was a bit too much.

Another thing that I thought was weird was the sex. Ok, wait a minute, not exactly the sex, but the timing of it. I’m gonna drop a couple of SPOILERS, so look away for a bit, ok? Let’s just say that Claire is hugely unexperienced in the sexy business, but she and Jake sleep together right after their first kiss… which came out of nowhere too. I don’t know… The moment would have felt more natural to me, if that wasn’t just her second time, and if her first experience would have been better.

I was kind of disappointed that Jake only truly noticed Claire after she had a makeover, and even so, he kept her hidden from everyone he knew, and wasn’t keen on being seen out with her. I hated this, and I thought it was a huge missed opportunity. I thought it would have been more interesting if there was no makeover, at least not before they got together. If Jake had showed interest before, and had helped Claire see herself like he did – beautiful – BEFORE, I think it would have made their bond stronger and the relationship more believable.

Also… have I mentioned how much I hated the fat shaming? I could not understand it though, because Claire is curvy, but she’s not fat!

At the end of the day, the bad outweighed the good by a long shot on this one, so I can’t really recommend it. Sorry =/.