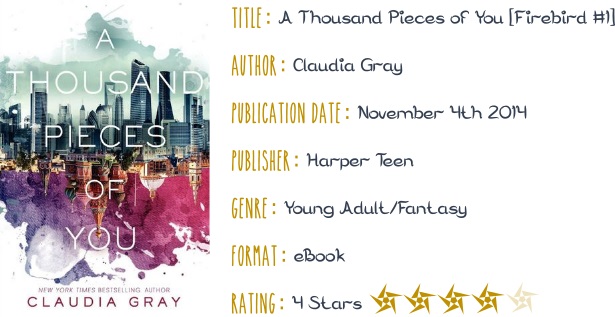 Cloud Atlas meets Orphan Black in this epic dimension-bending trilogy by New York Times bestselling author Claudia Gray about a girl who must chase her father’s killer through multiple dimensions.

Marguerite Caine’s physicist parents are known for their groundbreaking achievements. Their most astonishing invention, called the Firebird, allows users to jump into multiple universes—and promises to revolutionize science forever. But then Marguerite’s father is murdered, and the killer — her parent’s handsome, enigmatic assistant Paul — escapes into another dimension before the law can touch him.

Marguerite refuses to let the man who destroyed her family go free. So she races after Paul through different universes, always leaping into another version of herself. But she also meets alternate versions of the people she knows — including Paul, whose life entangles with hers in increasingly familiar ways. Before long she begins to question Paul’s guilt — as well as her own heart. And soon she discovers the truth behind her father’s death is far more sinister than she expected.

A Thousand Pieces of You explores an amazingly intricate multi-universe where fate is unavoidable, the truth elusive, and love the greatest mystery of all.

After a little pressure from some people… yeah, you, Kat and Cátia, I finally FINALLY read the first book of the Firebird trilogy.

I already understood a bit about what I was gonna read about, but still, A Thousand Pieces of You took me a bit by surprise and I ended up enjoying it a little more than I thought I would at first. I absolutely enjoyed the writing of this book, and the plot was awesome. Being a science girl myself, I really liked all the science stuff in the book, the physics elements, the multi-verses, everything. I loved the theory and the explanations. Honestly, I don’t know what took me so long to pick this one up.

The characters were a bit harder to love, mostly because the situations and worlds change them a bit. Marguerite is a bit of a conundrum… see, I kind of like her, but she does some shitty things during the book. I did like Theo and Paul, though I have to say that I saw what was happening and it changed a bit the way I see each of them. Most of all, I really liked her family!

Disclaimer: There is one particularly wrong scene in this book, if you’ve read it, you know what it is. The fact that Marguerite makes a decision that will change the Russia-verse Marguerite’s life considerably and is irreversible, is all kinds of wrong.

The plot was really awesome and entertaining, though I did guess some plot points! – I’m so freaking proud that I guessed 3 major things! Though it frustrated Kat and Cátia a little tiny bit :P.

I’m super excited about this series, and I can’t wait to read book 2 :D.

Have you read it? Let’s discuss…