We’re celebrating the release of A BOY LIKE YOU by Ginger Scott!

They say everyone’s a superhero to someone. I’m not sure who I’m supposed to save, but I know who saved me.

We were kids. His name was Christopher. And up until the day he pulled me from death’s grip, he was nothing more than a boy I felt sorry for. In a blink of an eye, he became the only person who made me feel safe.

And then he disappeared.

Now I’m seventeen. I’m not a kid anymore. I haven’t been for years. While death didn’t take me that day, the things that happened left me with scars — the kind that robbed me of everything I once loved and drove me into darkness. But more than anything else, that day — and every day since — has taken away my desire to dream.

I wasn’t going to have hope. I wouldn’t let myself wish. Those things — they weren’t for girls like me. That’s what I believed…until the new boy.

He’s nothing like the old boy. He’s taller and older. His hair is longer, and his body is lean — strong and ready for anything. I don’t feel sorry for him. And sometimes, I hate him. He challenges me. From the moment I first saw him standing there on the baseball field, he pushed me — his eyes constantly questioning, doubting…daring. Still, something about him — it feels…familiar.

He says his name is Wes. But I can’t help but feel like he’s someone else. Someone from my past. Someone who’s come back to save me.

This time, though, he’s too late. Josselyn Winters, the girl he once knew, is gone. I am the threat; I am my worst enemy. And he can’t save me from myself.

I read this book as a buddy read with Cátia @The Girl Who Read Too, so go to here to read her review of A Boy Like You.

How do I even start this review? DAMN!!! This book kind of broke me. But I have to say, Ginger Scott’s writing?! It’s getting better and better! A Boy Like You is told through Joss’ POV, and the writing is gorgeous and deep and WOW. I loved it. The pacing is a tiny bit slow, but it made sense in terms of the story and the plot, so I didn’t mind it much. The chapters were huge though, eheh.

This is a very character driven story though, and the characters are perfectly imperfect. Joss is one of the strongest girls I ever read about, but she’s so messed up and self destructive, that it broke my heart to read about her. But even through her self destructive moments, she was still a fighter and resilient as hell. I loved her. 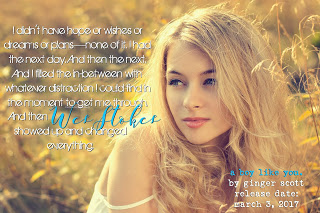 Wes is… ugh… how to even put it into words? He’s such a great guy. It’s so rare for the boys to be the rule followers and straight arrows in YA books, and I loved that he was. He was also such a strong and good person. And shy, oh my, he was so shy sometimes, and it was adorable!

The rest of the cast of characters? AWESOME! I loved Wes’ brother and Taryn, but Kyle deserves all my love. This boy won my heart completely in this book, and I do hope that after book 2, maybe Ginger Scott will write him his own book? Kyle is Joss’ other half, he’s her friend, he’s the person that gets her completely, and for a moment there, I really thought the story would go somewhere it (fortunately) didn’t. I love this guy!

The story definitly threw me some curve balls that I didn’t see coming, but it’s more than just about the romance between Joss and Wes. It’s about friendship and family. How to deal with pain. How to deal with loss. How to overcome the unexpected.

It’s a beautiful story, but that ending? COME ON! Are you trying to break my heart???

I need the second book TODAY! I need to know what’s going to happen. I have so many “why”s in my head…

Guys, even though this book is Young Adult, it doesn’t quite read as YA. It’s a mature level of YA, and the issues in the book are also not your run of the mill YA problems. Give this one a chance, you won’t be sorry. 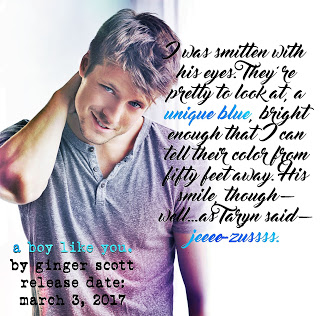 Ginger Scott is an Amazon-bestselling and Goodreads Choice Award-nominated author of several young and new adult romances, including Waiting on the Sidelines, Going Long, Blindness, How We Deal With Gravity, This Is Falling, You and Everything After, The Girl I Was Before, Wild Reckless, Wicked Restless, In Your Dreams, The Hard Count, and Hold My Breath.