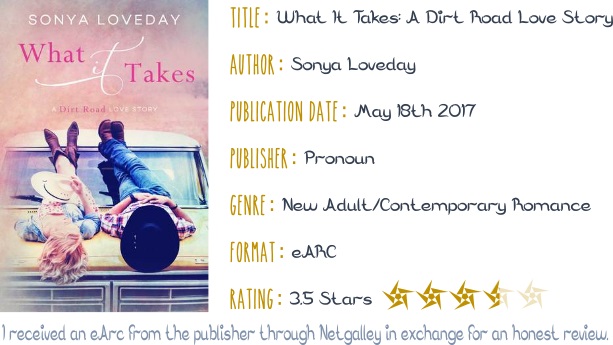 Gracen Lowell is on the hunt for a man — but not just any man. He has to be ‘the one’. Her only problem is that no one she’s dated has ever measured up to the charming qualities of her best friend.

Slade Owens knows no matter how much he loves Gracen, he’ll never be what she’s looking for. And he dang sure isn’t going to stick around to watch her fall in love with someone else. Slade leaving the Owens’ family farm for an out-of-state job should put enough distance between the two to allow him to move on with his life and Gracen to search for her happily-ever-after.

Gracen knows asking him to stay isn’t fair. Slade thinks leaving her behind is the only thing to do. Inexplicably drawn together, the best friends must decide if they have what it takes to own up to their feelings… before it’s too late.

I requested this book a little while back, and I only now I time to get to it. I’m glad I did though, because this was a good read, even if I thought that the plot needed more development, especially in the last third.

I really enjoyed the writing, I wouldn’t mind reading more books by Sonya Loveday. The book is told in dual POV, and I felt like the voices were very distinct.

I liked Gracen and Slade, but I did want to club them in the head at some points during the book. But I loved their friendship and their connection. I only wanted both of them to be honest about their feelings and actually have a conversation about it. Instead, they don’t and sh*t happens, and it was sad and I didn’t quite know what was happening next, and I was hating certain people, and wishing for everything to be different. *sigh*

I liked the issues dealt with in this book, even when I was scared for Gracen. But I do think the plot should have been a little bit more worked on. I needed a bit more from the story, and I needed a little more from the resolution as well.

But still, it was a pretty good story, and I want to read the book that I’m sure will follow, because I want to know what happens with Lex, Slade’s brother, he was such a great character too.

4 thoughts on “What It Takes: A Dirt Road Love Story (Sonya Loveday)”