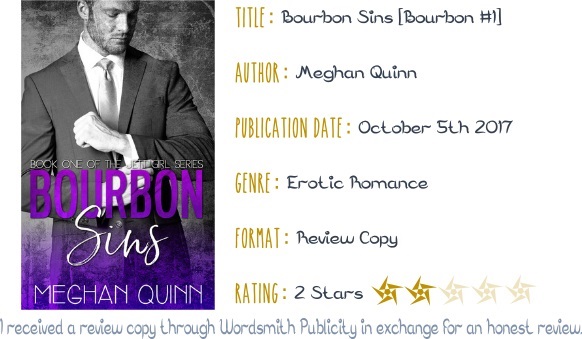 On the streets of New Orleans, sins are committed every night.

My name is Jett Colby and I save tarnished souls.

In the downtown, under the glittery lights of Bourbon Street, I found her in cheap lingerie, flaunting her body for callous men and money.

From the lace of her cheap lingerie, to her garter belt, I knew she had to be saved.
She had to be mine.

Broke and destitute with no way of out, she had no choice but to come to me and into my club.

She had no other choice but to become a Jett Girl.

But see, that’s the thing about this city; you might think that under the dazzling lights and illusion of salvation, she’s the one that needed saving.

When the glitter fades and the dirt is washed away, the one worth saving just might be me.

Guys, I’m a huge fan of Meghan Quinn. I’ve loved all the books I read from her, so even though a was a bit weary of this blurb, I still gave it a shot. It was also an absolute surprise, because I wasn’t quite expecting to receive this book to review. But let’s move on…

So, kudos to Meghan Quinn, because her writing is awesome as usual. Erotica is not usually an easy genre to insert comedy into, and Meghan did that, and she did it well. I have to say though, that given that this was a reedition of the book, I didn’t expect to find some incongruences in the verbal tenses, and I did. It bugged me a bit to be honest.

No matter how good of a writer Meghan Quinn is, the story and the theme just weren’t my thing at all. The whole plot of a rich guy saving a poor girl, taking her out of the streets and so on, I could be on board with. But the whole club, strip, and sex thing was too much. Jett takes Goldie to his club, no one can touch her there, the conditions are amazing, she has everything she needs, but she has to submit to a guy she never saw… she has to sign a contract and agree to have sex with him exclusively. Yeah, I could have gone without that part.

My other issue was that I didn’t like the characters. I’m gonna say that Goldie was very hard for me to get. First of all, I couldn’t pinpoint her age, and that drove me crazy. It’s mentioned that she’s been working at the strip club for 9 years, since she lost her parents to Katrina. It’s never mentioned that she started there before she was 18, so I’m gonna assume that by the time this book takes place, she’s already 27 years old. However, she sounds so much younger… I would have put her voice at around 22/23 yo, and that’s just a bit messed up. This is supposed to be a super self sufficient woman, but I never felt like that. I also get that she’s a super sexual person, no issue with that, but the narrative is a bit too much on this issue… she gets turned on by EVERYTHING! EVERYTHING!!!! Sheets, clothes, any guy, or girl, or just random wood. It’s too much. Especially once she forms a bond with Jett, because then these things become a bit weird and creepy.

For instance, she knows Kade and Jett are friends, however she still teases Kade every chance she gets, even though she LIKES Jett, and she KNOWS how Kade feels. It was just wrong.

Jett, well, I get his past, I do, but again, things don’t add up in terms of timeline and gravity of the events. And I get his need for control, but not in the way it’s done in this book. What he does to get Goldie to agree to go to his club, is despicable, and I hated that this was never discussed in this book.

The romance didn’t work for me either, because these 2 hardly know each other, and he’s obsessed, and she’s doing whatever he wants… I didn’t feel it.

There are some good scenes in this book, I liked some of the scenes between Jett and Goldie, and they do have chemistry, and their sexy times are super well done. But still, that was not enough to actually do this book for me. And while I’m curious about the remaining books in this series, I’m not sure that will be enough to make me want to read them.