Delilah Gordon has a secret.

She’s been in love with her best friend and the boy next door, Fox Nelson, since she was six years old.

And while most of her friends and family know about her unrequited crush, the one person who remains oblivious is Fox himself. To Delilah, it’s better this way. She’d rather pretend that they’re just friends, even though her feelings for the moody rugged mountain man are anything but tame.

Fox Nelson has a secret too.

As a wildland firefighter or “hot shot,” Fox parachutes into danger every day he’s on the job, risking all to fight wildfires that threaten ranches, forests and thousands of lives. But while Fox’s job is only for the brave, inside he feels anything but. The more he grapples with his raging demons, the more he realizes Delilah is the only one who can put out the flames.

As the two friends grow closer – and more intimate – than ever before, the more complicated their relationship becomes.

And Delilah has one more secret to reveal.

A secret that will change both their lives…forever.

A couple of months ago, I read Maverick and I fell in love with the Nelson family, so I was beyond excited when Hot Shot finally made it to my kindle. And Fox and Delilah didn’t disappoint.

I loved loved loved the writing on this one, I thought it was an extremely profound way of writing, and it messed with my heart. I really liked Delilah and Fox, and I loved their connection. They were both such strong and good people, but both a little (or a lot) broken. Delilah was convinced that she wasn’t enough and was never going to be loved back by her best friend, and Fox didn’t even know what love was to begin with… 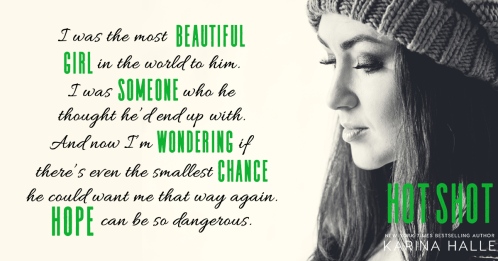 The story deals with a lot of complicated and difficult subjects, and while I thought the development of those subjects was super well done, I thought the resolution was a bit hasty. I kind of wanted a couple of chapters of Fox seriously dealing with his shit. I wanted the raw and gritty, and I felt like that step was a little glossed over.

Still, the story is FANTASTIC, and my little issue above is the only reason I’m not able to give it 5 stars. There was also another little thing that didn’t make it into my favorite list, but, you know, SPOILERS.

This was not an easy romance, but it’s very worth it. So do yourself a favor, and pick up this series ASAP. 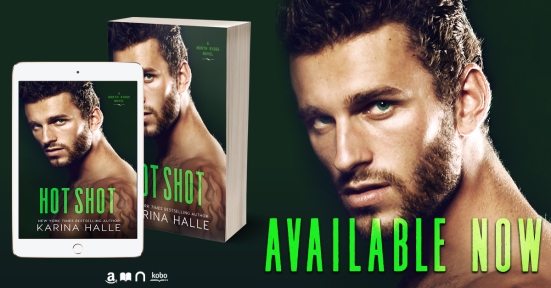 It’s dark now and quiet except for the crickets. In the distance, the town of North Ridge glows, the lights giving way to the dark mountain ranges behind it and beyond that, a clear, starry sky.

I head down the slope to the barn. It’s second nature to want to come here during hard times. Growing up, if anyone in the house was fighting — and it was usually Shane and Fox — this was where you’d find them afterwards, licking their wounds.

Right now the barn is empty, all the horses are either in their paddocks or the pastures. I glance up at the hayloft and contemplate going up there when I hear footsteps behind me.

I immediately stiffen. It’s funny how you can feel someone’s specific presence without seeing them.

“What’s wrong with you?” Fox asks gruffly from behind me. Typical. Even if he’s concerned, sometimes he comes across like it annoys him to be concerned.

I take in a deep breath and turn around. “I don’t know,” I say, my voice measured. “Just felt a bit nauseous.”

He studies my face intently, so intently that I look away, my eyes drifting over the empty stalls. “I thought maybe I’d pissed you off somehow,” he says.

Is he baiting me?

I meet his eyes. “Why would you think that?”

“You could barely look at me during dinner,” he says, taking a step toward me until he’s a foot away. “Was it something I did? Is this about Conan?”

He’s so damn earnest in that last question that I have to laugh. I fold my arms across my chest. “No, Fox. This isn’t about your squirrel. It’s not about anything. I’m just…tired.”

I can tell he doesn’t believe me and the intensity has changed in his eyes. They’ve become more focused on me, like he’s seeing me for the first time and nothing else around us matters.

“I like this,” he says, his voice sounding thick. He takes a strand of my hair between his fingers and runs them down. “Your hair is so long. You should wear it down more often.”

I roll my eyes and hope I’m not blushing. “You guys are all the same. A girl wears her hair down and puts on some makeup and suddenly you realize that she’s actually hot. It’s like She’s All That come to life.”

Oh shit. I probably shouldn’t have said that last bit out loud since it’s a whole bunch of assumptions and I’m not one to flatter myself like that.

But he just grins. One of those cheeky, warm smiles that makes his eyes crinkle at the corners, the dimples appear in his scruff. He doesn’t smile like that very often and every time he does for me, it makes me feel…invincible.

“Del, I’ve always thought you were hot,” he says, still smiling. No awkwardness or hesitation. He just comes out and says it.

And now I am blushing. “Yeah right.”

“What?” he asks, tucking my hair behind my ear and — hell — his touch causes warm shivers to wash down my back. “It’s true. I mean, look at you.”

“Do you remember that birthday party where we played spin the bottle?” I ask him, my voice sounding broken.

He nods. “Kind of.” But he doesn’t remove his hand, keeps playing with my hair.

I don’t know why I’m feeling brave all of a sudden but I am. “Well you spun the bottle and it stopped right at me. No mistake about it. And you got up and said it was stupid and left. Fox, we were good friends and you acted like kissing me was the worst thing on earth.”

His dark brows knit together but his eyes stay warm. “You remember that?”

“Fox. I’m a woman. I’m always going to remember when a boy rejects me, especially my best friend and especially at a young age.”

“But we were young. And I was pretty stupid back then.”

“You thought I was gross.”

He lets out a soft laugh. “I can promise you I did not think you were gross.” His hand then leaves my hair and trails down my arm to my hand. Sometimes Fox holds it and I know I shouldn’t think anything of it but every time he does I wonder if he realizes what it does to me. Then again, I’m starting to think he’s oblivious to absolutely everything.

“I didn’t kiss you,” he goes on, “not because I didn’t want to. I did.” He swallows, shrugs. “I just didn’t want our first kiss to be from spin the bottle.”

“What do you mean? Our first kiss?” I repeat, my pulse quickening.

“I don’t know, Del. Back then, I kind of assumed that we would end up together at some point. You know all through high school I had just been waiting to make my move and ask you out. At least figure out if you liked me or not. But then you started going out with that guy with the big ears, what was his name, Ryan McGee? And that’s when I realized that it was probably all in my head. You were just a friend. A sister, even. And I was just a brother to you.”

This is way too much to process.

Fox thought we’d end up together.

He actually liked me back in high school!

“You look shocked,” he says, raising a brow. “I thought it was pretty obvious.”

He lets go of my hand and shrugs with one shoulder. “It’s funny how life goes, isn’t it? It was probably for the best anyway. Could you have imagined us dating? Being a couple.”

Karina Halle is a former travel writer and music journalist and The New York Times, Wall Street Journal and USA Today Bestselling author of The Pact, Love, in English, The Artists Trilogy, Dirty Angels and over 20 other wild and romantic reads. She lives on an island off the coast of British Columbia with her husband and her rescue pup, where she drinks a lot of wine, hikes a lot of trails and devours a lot of books.

Halle is represented by the Root Literary and is both self-published and published by Simon & Schuster and Hachette in North America and in the UK. 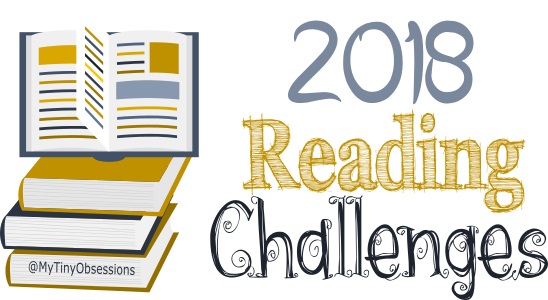 Hey people. Last year I set the goal at 150 books, and I read 174. Given that I started working in April, it lessened the amount of time I had to read. So, this year, I’m keeping the goal at 150, and I’m gonna do my best to reach it.

Besides the Goodreads challenge, I’m doing the  2018 New Adult Reading Challenge, created by Cátia @The Girl Who Read Too Much. I did quite well last year, but I wanna do better this time around.

The challenge has two different directions and I plan to tackle both. The first one is by the number of NA books read and there are a few categories:

I’m aiming for the NA Queen category, this year, because last year I only managed NA Expert.

The second thing within this challenge is a Reading Bingo and I’m so excited for this one! I finished my Bingo last year, so fingers crossed…

SO, THESE WILL BE MY 2018 READING CHALLENGES.
WHAT ARE YOU GUYS PARTICIPATING IN?