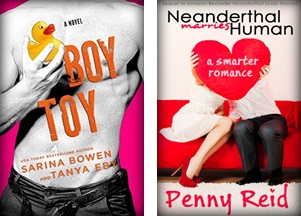 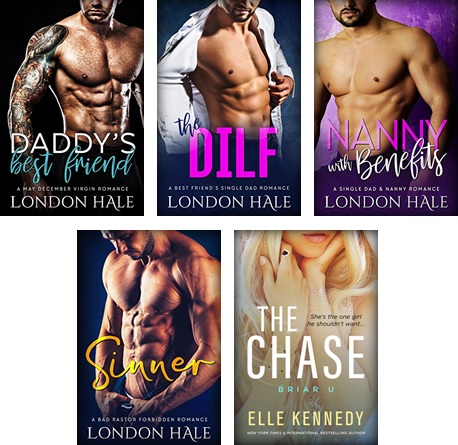 This week I finishd Daddy’s Best Friend, The Dilf, Nanny with Benefits and Sinner by London Hale, and I also finished The Chase by Elle Kennedy.

Next I’ll probably read Cuff Me and Talk Dirty To Me by London Hale.

Everyone says opposites attract. And they must be right, because there’s no logical reason why I’m so drawn to Colin Fitzgerald. I don’t usually go for tattoo-covered, video-gaming, hockey-playing nerd-jocks who think I’m flighty and superficial. His narrow view of me is the first strike against him. It doesn’t help that he’s buddy-buddy with my brother.

And that his best friend has a crush on me.

And that I just moved in with them.

Oh, did I not mention we’re roommates?

I suppose it doesn’t matter. Fitzy has made it clear he’s not interested in me, even though the sparks between us are liable to burn our house down. I’m not the kind of girl who chases after a man, though, and I’m not about to start. I’ve got my hands full dealing with a new school, a sleazy professor, and an uncertain future. So if my sexy brooding roomie wises up and realizes what he’s missing?

He knows where to find me.

I’m so happy to be able to able to visit the Briar University world again! ❤

I missed Elle Kennedy and her writing, and the amazing group of friends that she created on the Off Campus series, and I’m very glad that most of them made an appearance in this book. And I really loved the 2 new characters that she gave us on this first book of this new series.

I really liked Fitzy, though sometimes I wanted to smack him for his stupidity. The character definitly had layers and I understood his reasonings, but nevertheless, he’s one of the reasons I’m not giving this book 5 stars, because Fitz’s character development is SO SLOW!

Summer, however, I LOVE! This girl is all kinds of amazing, and it’s so rare for me to like a girl MC more than the guy, but Summer stole the show. I loved her internal dialogs, I loved how Elle Kennedy represented Summer’s wandering mind, I loved how protective she was of the people she loved, and how she fought for what was right. But mostly, I loved that even though she didn’t have it easy, she didn’t confirm and she always tried to be better.

I loved the romance between these 2, they had such different personalities and ways of living their lives, but they just fit! But mostly, I loved he development of their relationship. I’m happy that they took their time, and went through all the ups and downs when they did.

However, I was not a fan of the love triangle thing. It was clear that Hunter never stood a change, but I didn’t appreciate that he was lead on for so long. It put a damp on my enjoyment of this book, and it’s the other reason why this is not getting 5 stars from me.

Elle Kennedy writes amazing romances, but she also writes amazing friendships, and I’m so happy for the connection between Summer and Brenna. I love Brenna! And while on the Off Campus series I always felt like the guys shone more than the girls, I think Briar U might go the opposite way, and that makes me excited for the prospect.

Guys, this is yet another amazing book by this author. If you’ve read and loved the Off Campus series, get this book now!

I want to say no.

But I also want to say yes.

I call this the Summer Dilemma—the frustrating, polar reactions this green-eyed, golden-haired goddess sparks in me.

Fuck yes and hell no.

Get naked with her. Run far, far away from her.

“Thanks, but I don’t like to dance.” I’m not lying. Dancing’s the worst.

Besides, when it comes to Summer Di Laurentis, my flight instinct always wins out.

“You’re no fun, Fitzy.” She makes a tsking noise, drawing my gaze to her lips. Full, pink, and glossy, with a tiny mole above the left side of her mouth.

Hell, everything about Summer is hot. She’s hands down the best-looking girl in the bar, and every dude in our vicinity is either staring enviously or glowering at me for being with her.

Not that I’m with her. We’re not together. I’m just standing next to her, with two feet of space between us. Which Summer keeps trying to bridge by leaning closer to me.

In her defense, she practically has to scream in my ear for me to hear her over the electronic dance music blasting through the room. I hate EDM, and I don’t like these kinds of bars, the ones with a dance floor and deafening music. Why the subterfuge? Just call your establishment a nightclub, if that’s what you want it to be. The owner of Gunner’s Pub should’ve called this place Gunner’s Club. Then I could’ve turned right around when I saw the sign and spared myself the shattered eardrums.

Not for the first time tonight, I curse my friends for dragging me to Brooklyn for New Year’s Eve. I’d way rather be at home, drinking a beer or two and watching the ball drop on TV. I’m low-key like that.

“You know, they warned me you were a curmudgeon, but I didn’t believe it until now.”

“No-Fun Police? Is that better?” Her expression is pure innocence. “Seriously, Fitz, what do you have against fun?”

An unwitting smile breaks free. “Got nothing against fun.”

“All right. Then what do you have against me?” she challenges. “Because every time I try talking to you, you run away.”

My smile fades. I shouldn’t be surprised that she’s calling me out in public. We’ve had a whopping total of two encounters, but that’s plenty of time for me to know she’s the type who thrives on drama.

“Got nothing against you, either.” With a shrug, I ease away from the bar, prepared to do what she’s just accused me of—run.

A frustrated gleam fills her eyes. They’re big and green, the same shade as her older brother Dean’s eyes. And Dean’s the reason I force myself to stay put. He’s a good friend of mine. I can’t be a jackass to his sister, both out of respect for him, and for fear of my well-being. I’ve been on the ice when Dean’s gloves come off. He’s got a mean right hook.

“What? I didn’t hear the last part,” she says over the music.

I dip my mouth toward her ear, and I’m surprised that I barely have to bend my neck. She’s taller than the average chick, five-nine or ten, and since I’m six-two and used to towering over women, I find this refreshing.

“I said we’re cool,” I repeat, but I misjudged the distance between my lips and Summer’s ear. The two collide, and I feel a shiver run up her frame.

I shiver too, because my mouth is way too close to hers. She smells like heaven, some fascinating combo of flowers and jasmine and vanilla and—sandalwood, maybe? A man could get high on that fragrance. And don’t get me started on her dress. White, strapless, short. So short it barely grazes her lower thighs.