I was a bit skeptical when the movie started (and sometime in the middle), but somehow the movie works. When I can get over the creepiness of all those ants, it is pretty spectacular. The fact that the first scene has Peggy Carter and Howard Stark, as well as a much younger Hank Pym, really warmed my heart! (Peggy Carter just has to be in all Marvel things now, right? It’s in her contract?)

The fact that the storyline wasn’t about saving the world, but was a heist, was ingenious and ultimately made the movie better, it stayed grounded, it showed that although Ant-Man has the potential, he’s not yet up to par with the Avengers. That’s “realistic” and it made the movie thoroughly enjoyable. Speaking of the Avengers, that scene with the Falcon was pure genius!

Paul Rudd is amazing! He’s so lovable and funny (but a kind of cute funny). Evangeline Lilly was alright as Hope, I look forward to see more of her as the Wasp 😉 ! I thought the “romance” was super well done, because it never takes from and center screen, actually, we don’t actually see the kiss, it totally blindsided me, though I had thought it would be obvious if they got together at some point.

Michael Douglas is pretty great as well as Hank Pym, and I loved his chemistry with Paul Rudd. Again, Paul Rudd is already a Marvel superhero!

If I had to pick a favorite scene, it would be that last part when Michael Peña’s Luis is telling Scott how Falcon’s looking for him… I cracked out laughing! He has some pretty amazing moments within the movie – I think some people in the theatre wasn’t really happy by my laughing sound – but that last scene stole it for me.

All in all, not my favorite Marvel movie, but definitely entertaining and worth the watch. And probably the one where I laughed the most (seriously, I think I was snorting at some point).

YES! After refreshing their youtube page every 5 minutes yesterday evening, I call it quits and went to bed, but now it’s here!

The trailer looks amazing, mind blowing amazing, and I can’t wait for 2016 to watch this movie on the theaters. Also, it so great that the scene that allowed this movie to go forward was included in the film and the trailer! 😀 Check it out below.

Red Band Trailer a.k.a. much more blood, violence and sex 🙂 :

Fox has just released a Deadpool promo clip (which is hilarious and you should totally watch below) and has also announced that the official Deadpool trailer is being released tomorrow! Yeah, really!!! 😀 😀 😀 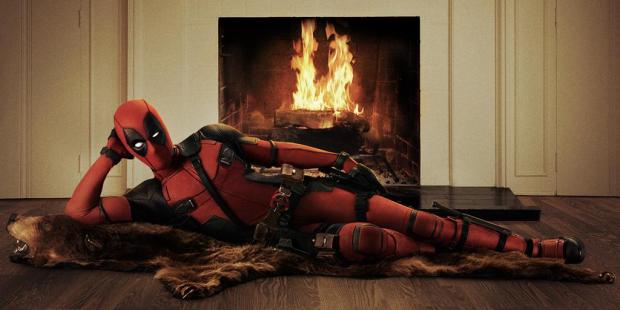 Since Netflix announced the several shows that they would be producing with Marvel, the one I’ve been more interested in has been “Marvel’s Jessica Jones“. Not only will it feature a female superheroes, but Krysten Ritter (who is one of my favorite actresses) plays the main character, and also David Tennant (one of my favorite actors) plays the villain.

The logo for the show was finally released yesterday, and the show is set to premiere later this year. It will be set within the same small universe of Daredevil (inside the major MCU), and Rosario Dawson is even set to drop by as Claire, first introduced in Daredevil. 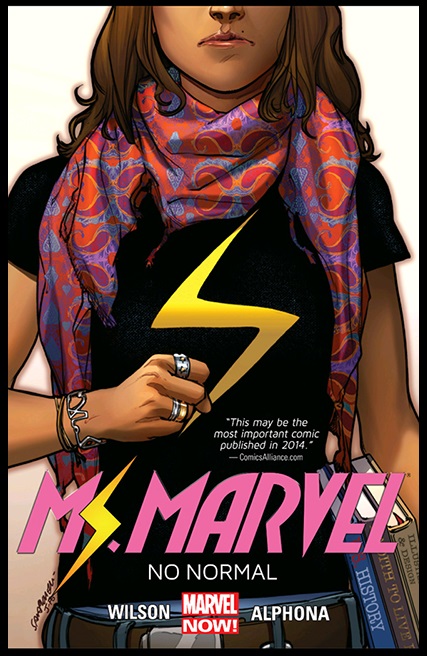 Kamala Khan is an ordinary girl from Jersey City — until she’s suddenly empowered with extraordinary gifts. But who truly is the new Ms. Marvel? Teenager? Muslim? Inhuman? Find out as she takes the Marvel Universe by storm! When Kamala discovers the dangers of her newfound powers, she unlocks a secret behind them, as well. Is Kamala ready to wield these immense new gifts? Or will the weight of the legacy before her be too much to bear? Kamala has no idea, either. But she’s comin’ for you, Jersey!

I hadn’t read a comic book in SUCH A LONG TIME! Too much time! Back when I was younger I tried to keep up with the X-Men, X-Force, Uncanny X-Men, Wolverine, etc… but then I kind of let that go. I love comic books, I devour anything and everything comic related, except the comics themselves. But early last month I was determined to start reading the new Ms. Marvel comic, so I ordered vol. 1 and vol. 2 (that is, issues 1 to 11).

This is my first ever Ms. Marvel story, and I really liked Kamala Khan and her transformation into Ms. Marvel. The first 5 issues, that is, Vol. 1: No Normal, is really about how Kamala fits in her world, how she becomes Ms. Marvel and how she brings that into her own universe and reality. 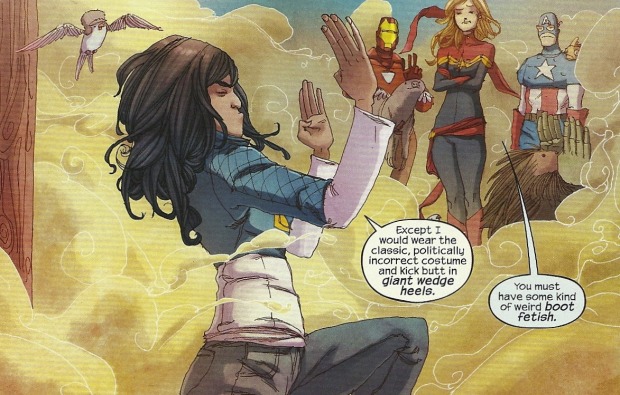 I really liked the diversity here, Kamala is a Pakistani-American 16 year-old, born and raised in Jersey City. She struggles to find her own identity, torn between her semi-conservative parents, her Muslim heritage and her American identity.

I loved the mist where she gets her powers… being currently watching Agents of SHIELD, that was a very cool Inhumans reference!

I rather liked these first five issues, though I have to admit that they felt kind of slow. It took Kamala all of 5 comics to assert herself and her identity. There wasn’t that much action, so I got bored kind of fast…

It’s done. After months of rumors and castings, MARVEL has finally announced that 19 year old Tom Holland will be the next Spider-Man. 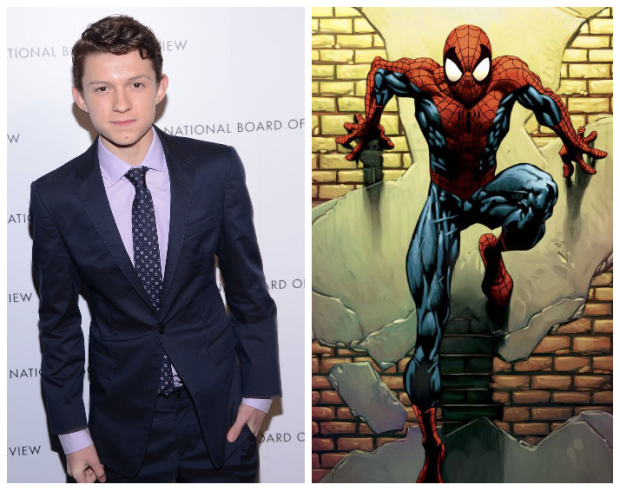 A lot of people seem to not be happy about this casting, either because Tom looks so young, or because they feel a reboot wasn’t necessary, or just because he’s unknown…

I have to be honest, I didn’t want a reboot, I loved Andrew Garfield as Peter Parker, and I’m super sad to see him go. That said, Marvel had announced a while back that they wanted a younger Spider-Man, so the reboot kind of makes sense. I foolishly hoped that they would opt for Miles Morales as Spidey and not Peter Parker, but my hope went away as soon as they released the frontrunners for the role…

Then from that list I was kind of hoping for Charlie Rowe, because I love him to bits, but I knew it was a long shot, Asa Butterfield was the favorite. But now they announced that Tom Holland actually got it… so, how about that?!

I don’t have a problem with Tom looking young, or with the fact that he’s mostly unknown – I think this is good actually – I just don’t see him as Peter Parker, not the Peter that Andrew Garfield taught me to love…

Best of luck to him.

I’m seriously excited about Ant-Man, just take a look at these posters, aren’t they amazing?! 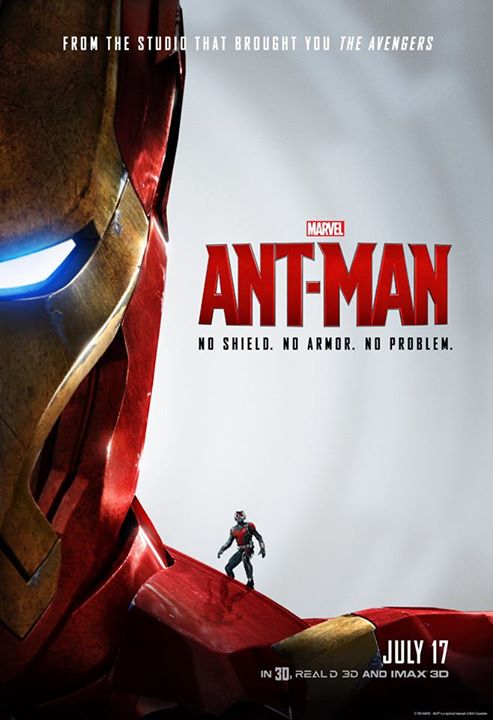 I think these are about the BEST POSTERS the studio has ever done. Also, there’s this TV spot…

Wow, I hadn’t posted about a movie in a while… oh well, here it is… When I got back to Portugal, after my trip to Brazil, I managed to include a visit to the Movie Theatre with my friend, to watch (by then, very late) the new Avengers movie.

Let me start of by saying that I loved the movie. Granted, I wasn’t as surprised and excited as the first one. It wasn’t as good story wise as Captain America: The Winter Soldier. But nonetheless, it was AWESOME! And for the life of me, I can’t understand all the hating towards it. Warning, there will be SPOILERS!

What I wasn’t especially fond of:

Oh ABC, I’m really happy with you today, though it took it took you long enough! The network has announced yesterday the renewal of 22 shows, including some that made me real happy, such as Castle that will be back for its 8th season (with Stana Katic’s return still up in the air); Marvel’s Agents of S.H.I.E.L.D., which will be back for a 3rd season; Marvel’s Agent Carter was granted a 2nd season (and it’s probably the one I’m most happy about!) and Galavant, that amazing comedy, will be back for a second year! 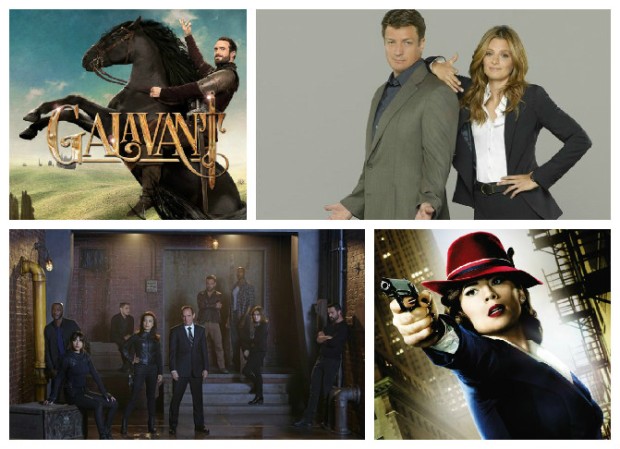 Not everything was good news though, ABC has decided to pull the plug on Forever, not renewing it for a second season, and Resurrection.

Best news I got yesterday when I was getting ready to go to sleep: Netflix has renewed Daredevil for a second season, which will be available in 2016.

I’m still a few episodes short of finishing up the first season, but I’m really excited about this. I just hope that all the other Marvel/Netflix series to come are as good and receive the same treatment.

“With the first season of “Marvel’s Daredevil” proving a smash success with both audiences and critics, Netflix and Marvel will continue to create further adventures of the Man Without Fear! Doug Petrie (“Buffy the Vampire Slayer,” “American Horror Story”) and Marco Ramirez (“Sons of Anarchy”), who worked closely with Executive Producers Steven S. DeKnight and Drew Goddard during the first season, will serve as showrunners for Season 2. Petrie, Ramirez, Goddard (“Cabin in the Woods”), and Jeph Loeb (“Marvel’s Agents of S.H.I.E.L.D.”) will serve as Executive Producers of Season 2.

“While previous commitments unfortunately prevent me from continuing on with Daredevil into its second season,” DeKnight explains, “I could not be happier that Doug Petrie and Marco Ramirez are carrying the torch. They were invaluable collaborators during our first season, and I for one can’t wait to see what they do with the show moving forward.”  – Marvel.com