Yesterday, the Shadowhunters poster was finally released, as well as the character posters you can see below. I have to say, these posters look good, but Kat McNamara still has something about her that doesn’t scream “Clary” to me… I don’t know… What to you guys think?

Halleluja people! Finally!!! After months of random behind the scenes photos, a few promos and a lot of teasing, Buzzfeed  revealed yesterday the first trailer for the new Shadowhunters series at ABC Family.

By the way, thank you Cátia, best thing ever to wake up at 4 a.m. and having this on my twitter notifications 😀 .

I like it! I think it looks cool!!! Sure, a few things will be different, Jocelyn sending Clary through a portal (?!) is a bit iffy, but hey, I can live with that.

The cast all looks great, and Dom sounds so Jace-like (yay!). My only tiny problem is with Kat and her Clary… I’m still not sure about her acting and this trailer did nothing to calm my nerves about that. Matthew Daddario and Emeraude though, look perfect as the Lightwoods. And Harry as Magnus too 😀 !

Did they make the seraph blades retractable or whatever? Isn’t that a bit weird?

I can’t wait for this show 😀 ! I know most of the cast (or all) has wrapped, so I think that the show is now all in post-production. January can’t come fast enough. 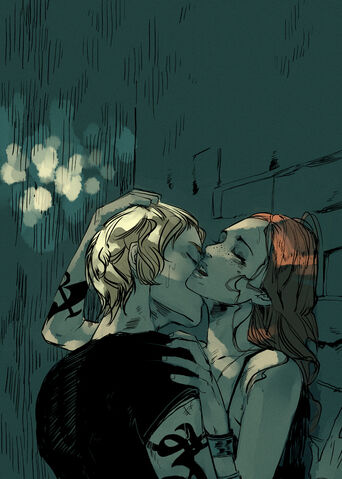 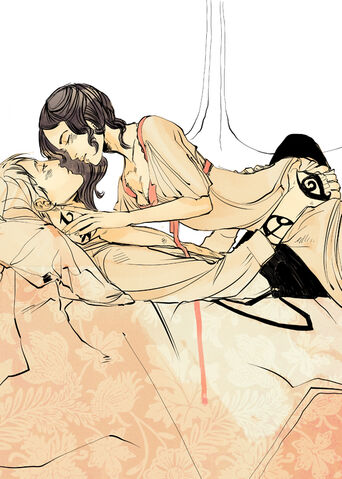 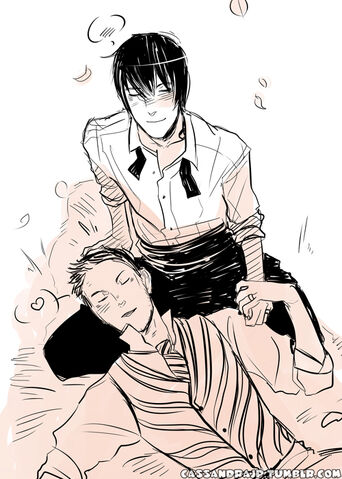 Yesterday, after Kat’s Q&A on twitter, she released a photo of the main cast (minus Simon), in costume, probably in Magnus loft for his party. Check it out.

So what do you think? I read a lot of people complaining about Clary’s outfit, remember please, the dress belongs to Izzy, is supposed to be short and revealing. About Isabelle’s dress, I can totally see her using that, she uses some weird stuff throughout the books. About Magnus not being sparkly enough, we’re not having a proper look at him.

I think they all look great, Dom (Jace) is especially hot, as well as Matthew (Alec), as usual too.

After I did the last post, they kept sharing pics… so here’s one more, and this one is HOT!

Where are you Simon & what's happening in the cemetery behind your van? @MatthewDaddario @DomSherwood1 @Kat_McNamara http://t.co/64ZZZrMgtZ

First look at the City of Bones:

And Alan being an awesome Valentine (I’m really liking the red runes!):

Just a dude in a trailer waiting to take over the world Versace style. @ShadowhuntersTV #Shadowhunters http://t.co/F3g67KbMAK

There was also an amazing exchange between Alan and Jon Cor, about the whole Hodge/Valentine conundrum:

And a very sweet family pic… they all look so cute:

Jon Cor onset showed us this video of Matthew practicing with his bow and arrow!

@MatthewDaddario exhibiting some serious swagger while learning from the best of the best tonight... The Batman! http://t.co/IczGEi1fsa

Today's archery practice in the Stunt Rehearsal stage makes me smile as much as 'Alec'. Great shots @MatthewDaddario http://t.co/vO22bcwFDn

Hodge is in the house!

And also, Jade Hassouné had a mold of his ears made this week 🙂

Got my ears did today. 💅😁 #ShadowHunters #Meliorn #WhoIsMeliorn #theMortalInstruments #prosthetics

A photo of shadowhunter training:

What else would we be doing in a cemetery on a Friday night, but teaching ShadowHunter Initiation training... http://t.co/lLrN0eLmc9

And the gang working out 🙂 , David Castro already in the mixed.

After the first few days of the week, which were crazy in terms of tweets of BTS stuff, the rest of the week was a lot calmer. I suspect it will be calmer still from now on. There are more BTS pics, and some with Dom and Matt with their respective girlfriends, and all, but I just wanted to put the cast here. Enjoy.

They are quite prolific in social media… McG et. al gaves us a few more pictures and little videos to keep us entertained until January… bliss…

I’m in love with that picture of Simon and Izzy, they look so cute. And the one of only the cast, please notice how each pairing is touching each other, oh yeah!

McG having some fun before a scene with @Kat_McNamara & @arosende . Think he looks good in front of the camera? http://t.co/2RRCvqp1w7

I was going to wait out until the end of the week… but on the third day they have already posted way to many pictures, so here we go…

Jon Cor decided to share a pic after working out…

A great picture of Jace and a stele. I know the light is a bit wooky, but I could swear that he’s using contacts… also, that stele!!!

Then some pictures of Izzy:

This one is hilarious

Specially when Alan (a.k.a. Valentine) decided to comment it:

A couple of nice “Clace” pictures:

Day 12 of filming gave us a couple of very nice Sizzy/Izzy pics:

And also, a shirtless Simon…

From now on, if a coworker comes too close, I'm just gonna do some hair whippin' ✊🙅 #lifelesson #Valentineaintgettingany #latenights #setlife #Shadowhunters @alanvansprang @mcgswonderland

And the 4 shadowhunters… chairs!

Should we even care that Simon’s “sword” has some kind of pink stuff in it?

I’m going to burst with joy right now… we have the Lightwoods!!! Smilling!!! Happy!!! Gorgeous!!!

And is Matthew sporting blue contacts?! Are we having a blue-eyed Alec as Cassie intended?!