I’ve finished Marvel’s Jessica Jones over a week ago, and I think I’m still recovering from it, because the show is just AWESOME!

I won’t go into a deep review of of season, first because you should really watch it without a preconceived notion of what’s going on, because it will BLOW YOUR MIND. And secondly, because I don’t want to review this show, I just want to gush about it. Is that alright?

I loved Daredevil, but I think that Jessica Jones was able to be even darker and grittier. It has less blood and fights than DD did, but its emotional punch is way fiercer. This is the kind of show that will make you truly uncomfortable, and it will make you sick, and you won’t be able to get your eyes off of it.

The acting is overall brilliant. ALL of the actors did amazing things with their characters, truly people, ALL OF THEM. But for me Krysten Ritter, David Tennant and Mike Colter, as Jessica, Kilgrave and Luke Cage respectively, just blew everything out of the park. I was always a huge fan of Krysten Ritter, but she’s just beyond amazing in her role as Jessica Jones. You just watch and you’ll see what I mean.

But David Tennant… WTFH???!!! Let me get this out of the way: Tennant is MY DOCTOR and he’s also one of my biggest celebrity crushes… but I was terrified of him in this series. Kilgrave is one of the worst (and best) villains in the MARVEL universe, and Tennant just did an amazing thing with it. He played it so perfectly that I was cringing and I was having difficulty to separate the man from the character (and that was never a problem before). Suddenly, I couldn’t conjure up an image of sweet and smiley David Tennant… oh no, all I could see was maniac Kilgrave! (and to make matters worst, he used his Doctor accent for the role, and he even gave one of my favorites “WELL…” and I died a little!)

Mike Colter was a really great surprise to me. I knew nothing about his character Luke Cage (other than he’s Jessica Jones romantic interest), but his interpretation of Luke made me super interested and super excited for his show to premiere.

I really liked the plot. Like Daredevil, it’s a bit concentrated on its repercussions – nothing huge like cities falling from the sky. But Jessica Jones is more personal, and with a bit higher stakes for all the emotional things involved. I liked it. A LOT! I hope there’s a season 2, because I need to see what happens next.

Have you seen JJ yet? What did you think? Did David Tennant scare the shit out of you too?

Another trailer is out for Marvel’s Jessica Jones, in preparation for the series release in a few days. While the first trailer was intimidating and creeping, this one shows is a bit more of Jessica herself and her relationship with her close circle of friends (and enemies). She gets a few amazing one liners. 😀 Check it out!

I love the posters (and animated posters) for Marvel’s Jessica Jones. Have you seen them yet? I love them so so much 😀 😀 😀

I literally squeaked when I read that David Tennant and Catherine Tate would be back to Doctor Who, I was already running wild scenarios in my head and thinking that now I really had to catch up to the new episodes – all while my browser decided to open said page – then the news opened and I can’t lie, I was a bit disappointed. Still, it’s a great news and this just might be the adventure that pushes me to start with the audio stories from DW from Big Finish. Ten and Donna are probably my favorite pairing ever in the history of Doctor Who, so seeing them together again is always amazing.

You can read the article here.

Oh happy day!!!  huge thank you to Cátia @The Girl Who Read too Much, who let me know on twitter that the trailer was finally out.

The trailer looks awesome! Krysten Ritter looks amazing, as always, and super different from all the roles I’ve seen her in. Luke Cage!!! 😀 I’m glad to see that he’ll have a huge role on this series as well as his own (maybe we’ll get to see Jessica Jones on his?!). But the creepiest part of the trailer is (without a doubt) David Tennant’s voice as Killgrave… he gave me chills. 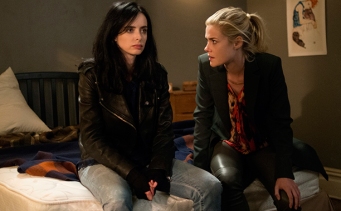 And check the video below, I got all goose bumpy, the music is beautiful and kind of creepy.

Hello! I introduced this topic last week, and I liked it, so I’ll keep with it. You know how sometimes you make a musical association in your head?! And then you simply can’t listen to that particular music without thinking of that other thing, whether it was a moment in your life, a game played, a video watched, show, movie, whatever something that was not the music original design. That’s what I’ll share here!

I feel like this one will be mighty obvious to all Doctor Who fans out there… this week’s music is I’m Gonna Be (500 Miles) by The Proclaimers. Have you made the connection yet?! I simply can’t listen to this music without seeing David Tennant marching and singing to this song… 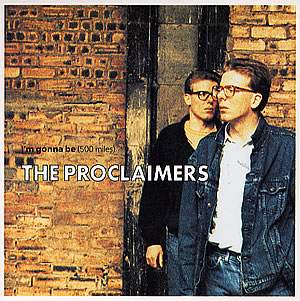 You do know what I’m talking about, right? When David Tennant was leaving the show in 2010, the crew and actors and everyone involved in the show came together for a farewell video, and this was the result:

Everytime I listen to this music on the radio, the street, in a movie,…, my head goes to David Tennant (and how I miss my Doctor).

Since Netflix announced the several shows that they would be producing with Marvel, the one I’ve been more interested in has been “Marvel’s Jessica Jones“. Not only will it feature a female superheroes, but Krysten Ritter (who is one of my favorite actresses) plays the main character, and also David Tennant (one of my favorite actors) plays the villain.

The logo for the show was finally released yesterday, and the show is set to premiere later this year. It will be set within the same small universe of Daredevil (inside the major MCU), and Rosario Dawson is even set to drop by as Claire, first introduced in Daredevil.

When news came out that David Tennant would be playing Kilgrave on Marvel’s A.K.A. Jessica Jones it was like two marvelous worlds colliding, but even better than actually reading the news, were the pictures of David Tennant at Marvel HQ!

Yep, Marvel.com reports that the former Doctor took some time while at NYC to visit the headquarters of Marvel and the pics are just wonderful.