In her witty and breathtakingly sexy novel, Emily Foster introduces a story of lust, friendship, and other unpredictable experiments. . .

Data, research, scientific formulae–Annabelle Coffey is completely at ease with all of them. Men, not so much. But that’s all going to change after she asks Dr. Charles Douglas, the postdoctoral fellow in her lab, to have sex with her. Charles is not only beautiful, he is also adorably awkward, British, brilliant, and nice. What are the odds he’d turn her down?

Very high, as it happens. Something to do with that whole student/teacher/ethics thing. But in a few weeks, Annie will graduate. As soon as she does, the unlikely friendship that’s developing between them can turn physical–just until Annie leaves for graduate school. Yet nothing could have prepared either Annie or Charles for chemistry like this, or for what happens when a simple exercise in mutual pleasure turns into something as exhilarating and infernally complicated as love.

Hey! Once again, I read this book with Cátia @The Girl Who Read Too Much, so head to her blog in the next few days to check out her take on this book.

Now guys, I have to admit that I have a few contradictory feelings about this book. I honestly really liked it, it was an entertaining and fun read (for the most part) and I absolutely loved the writing. The story is told from Annie’s POV and she’s a fantastic and funny narrator.

I really liked Annie and, for the most part, I liked Charlie too, though I feel, that even after having finished the book, Charlie is still a bit of a mystery to me. I like him, I understand him, I like that he was always honest and truthful and tried to put her first, but at the end of the day, I think something is still missing from his story… something big.

I loved “The Thing” and how Annie and Charles explored it, and I loved seeing their relationship grow from colleagues to more. It didn’t bother me for one second that he was her post-doc. Actually, living in the academic universe myself, the difference between them was very small, so I actually loved how informal their relationship was from the get-go. I liked that they took time to get to know each other and actually talked and evolved.

My problems started about halfway through the book. Let me just say, this book has a lot of sex. If I didn’t know better, I would say that this was an Erotica novel, and not a NA book, but hey… So, lots of sex. Lots and lots of sex. Some really really HOT sex. I’m cool with it. Until it morphs a bit into the problematic of absolute trust and absolute surrender and control, and I… don’t know… it made me feel uncomfortable. Especially towards the end, when his self-restraint loosens a bit. There’s nothing wrong with those scenes, at all, nothing violent or anything like that. They both want it, and like it, but I don’t know… if you read it, talk to me about it.

I really liked the ending. Fair warning, this book doesn’t have a HEA, and it is the first of a series, so the next book picks up exactly where this one leaves off. At the end, there’s no resolution for the couple. There’s a resolution for Annie, and I was so proud of her for sticking to her guns and doing what was best for her. I think that both characters go through some transformation, but at some point during this story, Annie loses herself a bit, so I’m glad she ultimately did what she had to do.

I’ll for sure read the next book in the series, because I want to know how this will get resolved. If Charles will realize that he can be the person she needs, even if he thinks he can’t and won’t ever be able to. I’m also curious as to how they’ll solve the long distance thing.

I would recommend this book, because ultimately it was funny, sweet and hot. But I do think that this is not for everyone… so be advised 😉 .

Hello. I managed 20 books this past month of May, so I’m aiming for a similar number this month of June, so my TBR will have 14 books 🙂 . 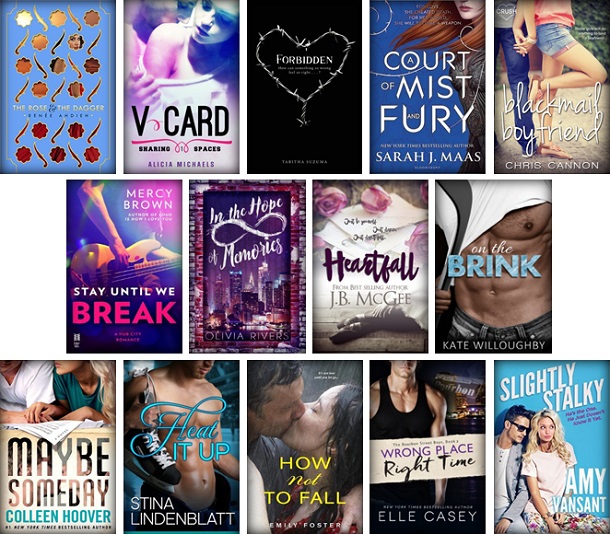 This is my TBR for June. Once again I’ll be reading A LOT of books with Cátia @The Girl Who Read Too Much, you can check out her TBR for June HERE.

Hey guys. Here we are, at the end of another month, and I’m bringing you another book haul. This month I didn’t haul as much books as last month, but it was still a pretty good one 🙂 . 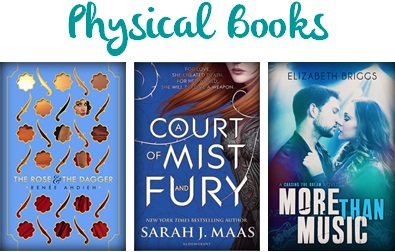 This month I bought The Rose and the Dagger and A Court of Mist and Fury. I still haven’t read any of them, but I will soon, and I just had to have them as soon as they were out. I’m a little sad about TRATD‘s colour, the blue on the paperback is not the best, but ACOMAF is gorgeous. I finally received my paperback signed copy of More Than Music by Elizabeth Briggs, which was sent to me by Elodie Nowodazkij after I won a giveaway she was hosting. 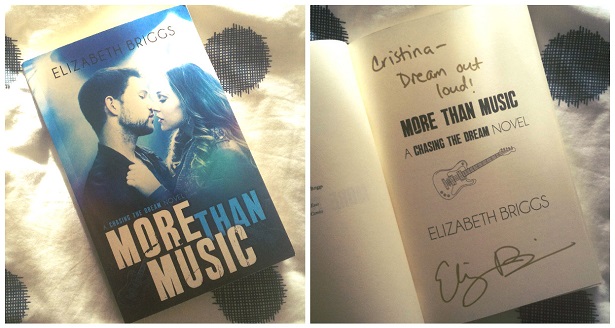 Once again, most of these books I got at Kindle deals, for nothing!