The Sherlock Special, airing on the January 1st 2016, has a name, and it’s eirie… The Abominable Bride. A new trailer was released (below) and I’m super excited for this one, because even though they are clearly out of the time we are used to, they’re still the same 😀 . Also, they confirmed that season 4 will begin production in the Spring of 2016, so we have a light at the end of the tunnel…

It already feels like Christmas! After so long without having anything “Sherlock“, two goodies in two is AMAZING! A special clip from the Christmas Special was released (see below).

It looks so good (how I have missed Benedict Cumberbatch as Sherlock Holmes…). Is gives us nothing in terms of plot, but it’s great as it is. Also, they announced at Comic-Con that the Special will have a theatrical released in selected theatres.

It’s kind of weird seeing Benedict Cumberbatch without his gorgeous curly locks, but their look is cool. Can’t wait for Christmas!

Sherlock is back on track! Well, at least they already have a script for the special Christmas 2015 episode and they had a table read today, according to BBC. 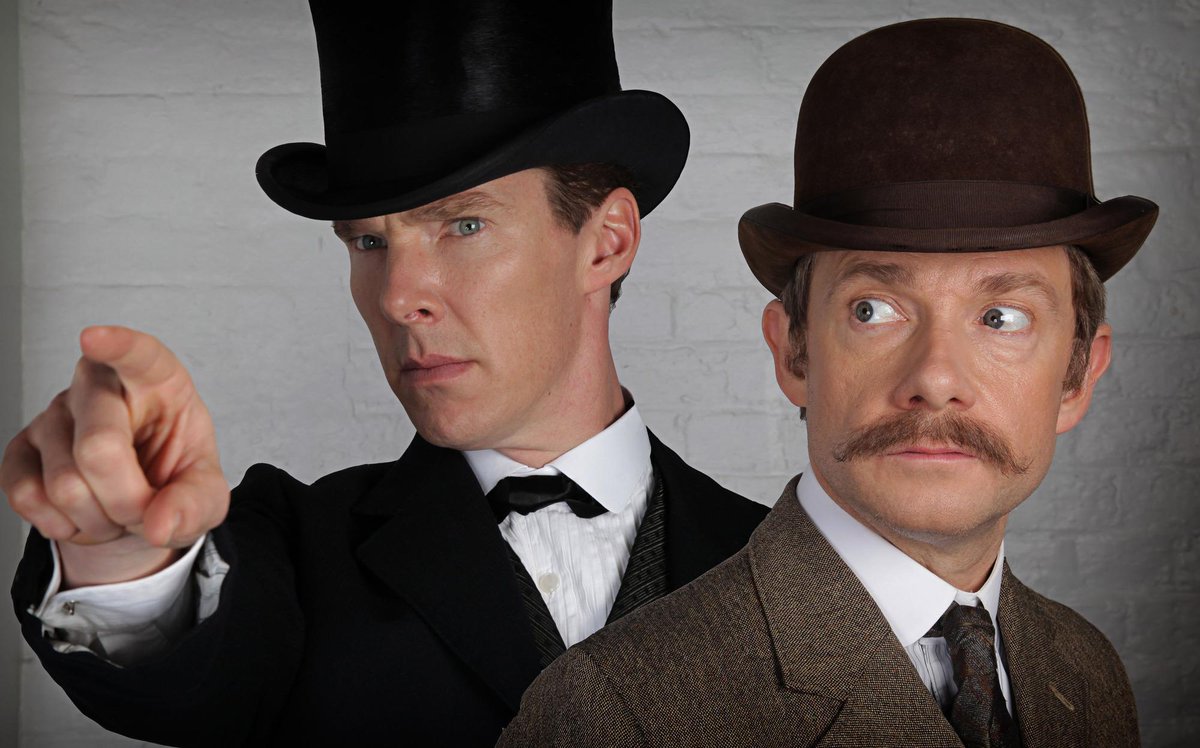 This is what we've been doing today. Later on a pic of #Sherlock and John as they'll appear in the Special. #221back http://t.co/bdFIhcRMsW

The boys apparently also posed for a photo with the attire they’ll be using for the Christmas special, though I’m not sure that’s entirely true… let’s admit that Benedict looks too much like himself in that photo and not at all like Sherlock! And Martin has the mustache back?! Hell no! =P I guess we’ll have to wait and see, but at least things are moving along!!! =D

Everyone who’s a fan of Doctor Who and Sherlock has heard, read or wanted a crossover between the 2 shows for a while, and now, while promoting season 8 of Doctor Who, Steven Moffat, writer and producer of both shows, has ignited that fire stating that we would be willing to do it, as RADIOTIMES informs!

“Look I’m going to come clean on this: I would,” said Moffat. “Go speak to Cumberbatch, Freeman, Gatiss and Vertue, OK? They’re all in the way. I’m not the killjoy, it’s that lot. It’s probably not going to happen.” Moffat sympathised with the load groans from the audience: “I know!” he squealed, “What a bunch of killjoys I work with.”

Despite his own enthusiasm for the project, Moffatt can understand why it might be a bad idea. “You know in some ways, I think Mark’s got a point when he says that however good you imagine [the crossover], it would be almost better in your imagination than it would be if the two grand old egotists actually met. They’d just both go off in opposite corners and sulk that there was someone cleverer than them. [Imitating Sherlock/The Doctor] ‘No, I’m not going to do it, he can do it.'”

I love both shows! Two of my favorite shows ever, two of my favorite characters! But really Moffat?! You do understand the concepts of the two shows you run, right?! Because mixing the sci-fi, fantasy and the “impossible and fantastic” that is Doctor Who, with the racional drama that is Sherlock, would never, ever work! So, I only say: THANK GOD FOR THOSE “KILLJOYS”!

Here it is, apparently today is trailer day! The Hobbit: The Battle of the Five Armies just released its first trailer… enjoy!

BBC started to tease Sherlock fans last night on twitter. Today, at 2:21 pm, BBC announced that Sherlock will be back not only for a 4th season, but also for a special, which is to be shot starting January 2015, with the rest of the season being filmed later that year. Which means (by my mental calculations) that it won’t be a Christmas special, right?!

“A special, plus a new series of three episodes — it’s a record-breaking run! Of course, it’s far too early to say what’s coming, but we’re reasonably confident that the very next thing to happen to Sherlock and John, is the very last thing you’d expect…” co-creator, writer and executive producer Steven Moffat .

Mark Gatiss added, “Series Four! At last ! It’s always special to return to Sherlock but this time it’s even more special as we’re doing… a Special! Not only THAT, we’ll then be shooting three more episodes which will take Sherlock and John Watson into deeper and darker water than ever before. The whole Sherlock team are terrifically excited to return for four new adventures. The Game is on — again!”

I can’t express how sceptical I was about going to watch this movie, due to the fact that I liked the first one, but it was a bit of a bore and I wasn’t sure if I should go see it in the big screen or just wait for next year and watch all three of them in a row. That said, and after more than 1 month from its opening, I finally went to see it this past week, and I’m so glad I did!

Still not rising to the magnificence of The Lord of the Rings trilogy, Desolation of Smaug is miles ahead of its predecessor, The Unexpected Journey. It’s action packed, doesn’t have dull moments, it has a lot of elves and a Dragon. Not to mention that it has Luke Evans, Orlando Bloom, Lee Pace and Benedict Cumberbatch in the same 3 hour movie… (although, in fairness, we never see Benedict!).

This adventure takes us right to Erebor and past its hidden door. We meet the wood-elves, see Legolas again and the lovely Tauriel and his father, King Thranduil. Laketown and Bard, the Bowman and his children. We meet Smaug, the Necromancer and Sauron. And we get to know the Dwarves a little better, although it’s not nearly enough to make us care about all of them.

Although this movie still has some filling moments, such as the love triangle between the Elf Tauriel, Legolas and the Dwarf Kili, most of the scenes make sense and some action scenes are awesome, such as the barrel escape and anything really that involves the elves!

Awesome as well is Smaug! I don’t really know if it’s because the Dragon is so well made or because he’s voiced and moved by the incredible Benedict Cumberbatch, but at some point, I was rooting for Smaug! The whole scene was just 5 stars.

I thought that Luke Evans couldn’t get any hotter that he already is… I was wrong, somehow that hair, the bow and the single father thing totally work for him.

Legolas, wow, how nice to see you again, I just thought the eyes were a little too blue this time around. But his archery is better than ever!

Benedict Cumberbatch and Martin Freeman, a.k.a., Sherlock and Watson, a.k.a., Smaug and Bilbo… wow… Martin doesn’t seize to amaze me. He’s brilliant! His interactions with his buddy in the movie are spectacular.

Radagast, The Brown, played by the amazing Sylvester McCoy (also known as the Seventh Doctor), deserves only good things! If you haven’t seen The Five(ish) Doctors Reboot, you totally should, just to know how funny this whole “Hobbit” business really is.

Also, Stephen Fry… wow… I do hope we never see him like this ever again… disgustingly on point…

The long wait for the third season of Sherlock is coming to an end! PBS has announced that the Sherlock will come back to the world of the living in the show’s third season, that is going to start airing January 19th.

BBC, however, has not set their return date for the show yet, but I guess it’s safe to assume that it’s will be around the same time, right?

This brilliant show has been on a prolonged hiatus since the beginning of 2012 due to the fact that both its stars spent the last 2 years filming high profile motion pictures, such as the Hobbit trilogy, where Martin Freeman plays the lead character, Bilbo Baggins, and Benedict Cumberbatch gives live to the Smaug/The Necromancer, or Star Trek Into Darkness, where Benedict plays the villain Khan.