After trading the barracks for a fixer-upper rental, navy SEAL Zack Nelson wants peace, not a roommate — especially not Pike, who sees things about Zack he most wants to hide. Pike’s flirting puts virgin Zack on edge. And the questions Pike’s arrival would spark from Zack’s teammates about his own sexuality? Nope. Not going there. But Zack can’t refuse.

Pike Reynolds knows there won’t be a warm welcome in his new home. What can he say? He’s an acquired taste. But he needs this chance to get his life together. Also, teasing the uptight SEAL will be hella fun. Still, Pike has to tread carefully; he’s had his fill of tourists in the past, and he can’t risk his heart on another, not even one as hot, as built — and, okay, yeah, as adorable — as Zack.

Living with Pike crumbles Zack’s restraint and fuels his curiosity. He discovers how well they fit together in bed…in the shower…in the hallway… He needs Pike more than he could have imagined, yet he doesn’t know how to be the man Pike deserves.

In the summer I read Connection Error by Annabeth Albert and I really enjoyed it, so when I saw this one on Netgalley, and with that blurb, I decided to request it. It shouldn’t be a surprise by now that I do love a good M/M romance, and throw a SEAL in the mix? YES PLEASE!

However, I have to say that this book didn’t really do it for me, and I found it OK, but not exactly great. Somehow I couldn’t connect with either character, or their decisions.

This was not my first story about a romance between an openly gay guy and a closeted one, but I felt like the characters weren’t fleshed out enough individually, you know? I liked Pike, he was out, he was never actually in the closet, he was just him and he was unapologetic about it and I loved it, but I wanted to see more from him. Maybe I’m not being fair, because we do have a lot of plot centered on the guys’ lives outside of each other, but I just felt like it was missing something. That was my problem with Zack too, though I had other issues with him too. He was always so scared of people finding out about him and Pike, that I feel like I didn’t really get to know much about him, besides the fact that he was bullied all his life and being out was an impossibility in his mind.

I loved seeing Ryan and Josiah (from Connection Error) here, especially Ryan. But here is one of my biggest issues with Zack… one of his best friends,  Ryan, is an ex-SEAL and he was always out, so why did Zack never felt like he could talk to him? Or even talk about the subject without outing himself? I understand that it was hard, and he felt like he was in an impossible situation, but it made no sense to me that he didn’t seek some support with his work issues at least.

I had a few problems with Zack’s teammates… yeah, there’s a lot of homophobia running around on this book :(.

The romance was ok, sweet and all, I did like to see them act all domestic and shit together. But I felt like there was a connection already when the book started, that was never really explained. I missed that, I felt like I needed a bit of background.

I did like the flow of the plot and the catalyst of things. It made sense, and I really liked their reactions to it and what followed. That was probably my favorite part of the book, to be honest, with Pike and Zack both standing up for themselves.

Overall, this was an OK romance, I will keep my eyes opened for more books from this author though, because I do like her stories. 😉

Once again, I didn’t haul that many books this month… mostly eARCs. 🙂 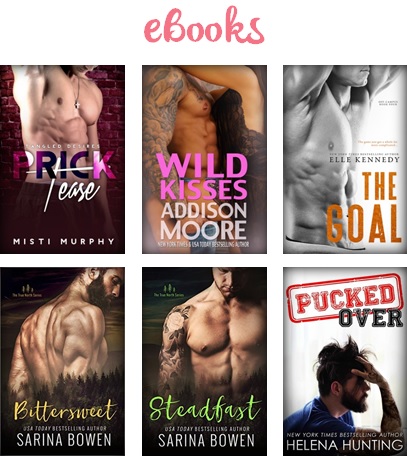