Outlander will be back in April 9!! Starz also released the season 2 trailer, which you can see below, and wow, that looks intense. It’s time for me to finally finish season one, because then I won’t have to suffer the wait! 😀

So… Cassandra Clare just announced the narrator for the audiobook of Fiery Trial, the eighth novella of the Tales from Shadowhunter Academy, and it’s none other than Outlander (super) hottie Sam Heughan (JAMIE (FREAKING) FRASER from Outlander!!!)!!!

Cute boys read on – Exciting casting news for the next audiobook in Tales from Shadowhunter Academy! Sam Heughan, aka the dreamboat Jamie Fraser in the Starz series Outlander, will read FIERY TRIAL, the eighth of the Tales from the Shadowhunter Academy stories. In which Simon finds a parabatai. Stay tuned for this incredible audiobook, on sale 9/22!

The first part of the first season isn’t even over yet, and I’m already suffering with withdrawal. Still, now Starz has given us a date, yupppiii! Claire and Jamie Fraser will return on Saturday, April 4th, 2015. Yeah… it’s 6 months from now… 6! I honestly don’t know what I’ll do, I guess I’ll have to read the books 😉 ! 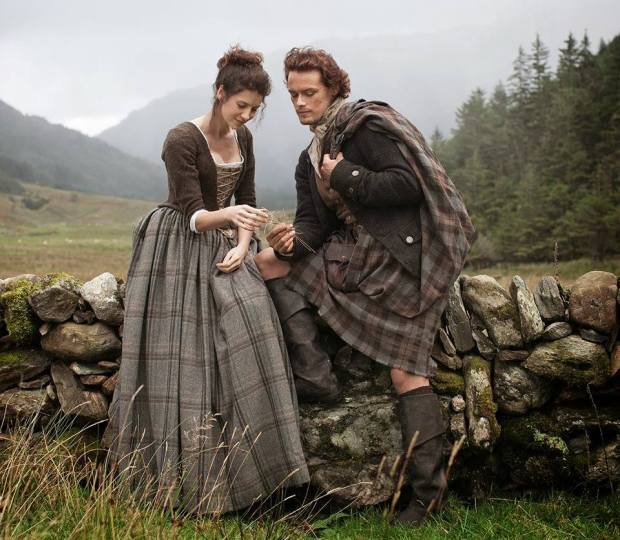 Once again, I’m a bit late to the party. But hey, saturday I arrived from Basel and was pretty beat up and realized I needed to watch something good, so, I had the three episodes released so far of Outlander and I just thought: “This is a good moment as any!”. So, while having dinner (which mainly consisted of pre-prepared thing, since I had no time to do any shopping), I started episode one… and that was it! Between some phrases that I couldn’t understand, and some gaelic that I definitely have no idea what it means, I was completely hooked!

Amazingly done, great scenery, great acting, great kilts… yeah… I might be a little bit in love with those kilts (obviously not the guy in the pic who wears them so well…). I’m so curious to read the books – whenever I finish the current series and the 2 others I have lying and waiting. Have you watched it? You should!