This week’s theme is “Everything has an end! Choose your favorite conclusion to a series“. I was going with the obvious and say Clockwork Princess, but then I reconsidered and I’m going with Ignite Me instead, because I loved this book and it gave me a huge book hangover 😀 . 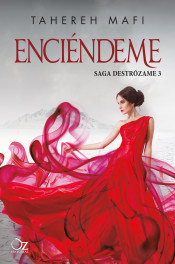 Portugal doesn’t have a cover yet, and it will maybe never have. But the spanish edition just came out a couple of months ago, and it looks like this. I personally don’t like it, but it’s not the worst cover either.

The original US and UK cover is definitly my fave 😀 . 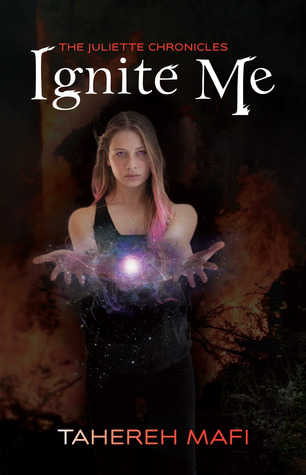 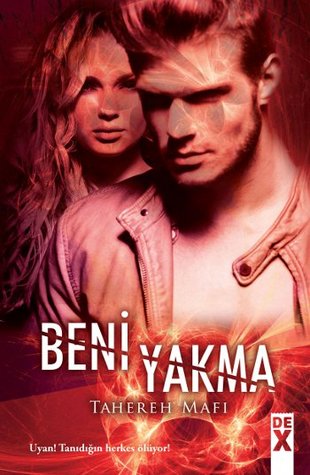 My least favorite covers are the Australian, Czech, Turkish and German editions. Do I need to explain any of them?!

We’re fast approaching Valentine’s day, and I’ve pledged that this month I’ll only read Romances (and it’s going great so far – 3 down!). But a couple of days ago was Friends’ Day, did you know that? Yep. So it got me thinking about something I really love to read in books: strictly platonic boy-girl BFFs. Oh, don’t get me wrong, one of my favorite type of romance to read is BFFs turned something more, but I do love when a book shows that a girl and a boy can be friends and nothing more. Here are some of my favorites.

1. Juliette and Kenji – Shatter Me Trilogy

I absolutely love Kenji and Juliette’s dynamic. They go to strangers to best friends in no time, because they connect really well together. And although Kenji throws some flirtation around – because it’s Kenji and he just can’t help it – there’s never a moment where it seems like their relation might go that way. Instead, they truly become BFFs, with Juliette using her BFF as a relationship advisor and all.

2. Cinder and Thorne – The Lunar Chronicles

Their relationship warms my heart! I just love how much they fight and banter and everything, but at the end of the day, they trust each other completely and would do just about anything for one another.

This is goals! Never while reading the 7 books, did I ever doubt that this was a strictly platonic friendship. NEVER! Harry and Hermione are BFFs and that’s it. Yes, I’m aware that a while back J.K. Rowling said that Hermione should have ended up with Harry, but I’m gonna forget she ever said that, because Hermione always belonged with Ron.

Oh, they are beyond perfect! I love their friendship. Early in the book, Simon explain how he and Penny are just friends and they never felt more than that, and how some people thought it was weird… yeah, see point nº 3!

Even though Ben is several years younger than Maggie, their friendship is beautiful and one of the many reasons you should read The One Thing by Marci Lyn Curtis. I wish I had a Ben in my life…

So, tell me. Do you like to read about awesome friendships between boys and girls that doesn’t lead anywhere else? What’s your favorite?

With Omega Point destroyed, Juliette doesn’t know if the rebels, her friends, or even Adam are alive. But that won’t keep her from trying to take down The Reestablishment once and for all. Now she must rely on Warner, the handsome commander of Sector 45. The one person she never thought she could trust. The same person who saved her life. He promises to help Juliette master her powers and save their dying world . . . but that’s not all he wants with her.

The Shatter Me series is perfect for fans who crave action-packed young adult novels with tantalizing romance like Divergent by Veronica Roth, The Hunger Games by Suzanne Collins, and Legend by Marie Lu. Tahereh Mafi has created a captivating and original story that combines the best of dystopian and paranormal, and was praised by Publishers Weekly as “a gripping read from an author who’s not afraid to take risks.” Now this final book brings the series to a shocking and satisfying end.

I am obsessed with this book! I started it on Thursday night (actually it was friday already, around midnight or something), thinking I would read a couple of chapters and head on to bed… yeah, that didn’t work out. I stayed up until 6 a.m. reading it and only stopped because I was conscious that I needed to get some sleep before sunrise – by this time I was also fully aware that there was no way I was going into work in the morning. I finished it as soon as I woke up on Friday… and then I re-read a few chapters… several times during the whole weekend.

So as you might have figured it out by now, I absolutely loved this book, it’s definitely my favorite of the series and I don’t understand why it isn’t longer, because I needed more of it. I have so many questions, and I don’t understand why this is only a trilogy, because I could have had more (or at least some more novellas to keep me tight up).

Have I mentioned before how much I love Warner? Yes? No? Oh well, I love Warner, a LOT! I loved that he finally explained everything to Juliette and that even extremely heart broken, he still did everything in his power to help her and gave her everything she wanted. He was so vulnerable throughout some parts of this book and that was such an interesting thing to read, given how he was always so in control in all the others. I loved all his moments with Juliette, and that what’s kept me awake for the whole night! 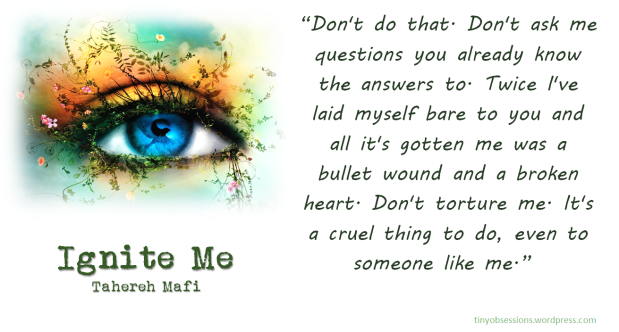 Juliette grew so much in this book. I loved that she stood up for herself and those she loves!

I also liked that she took her time figuring out her feelings and that she only went to Warner when she knew that she had all the choices but all she wanted was him. But it was hard! He was in so much pain and she wanted him and didn’t say it… oh…. my heart was in physical pain throughout all this. 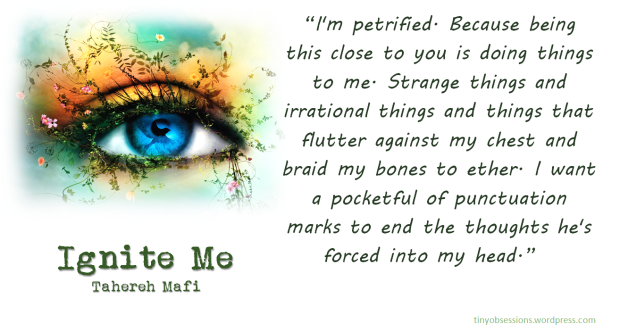 But people… the sex! OMG! The sex! If their scene together in Unravel Me was hot (and it was), it doesn’t hold a candle to everything that goes on here, just… wow! 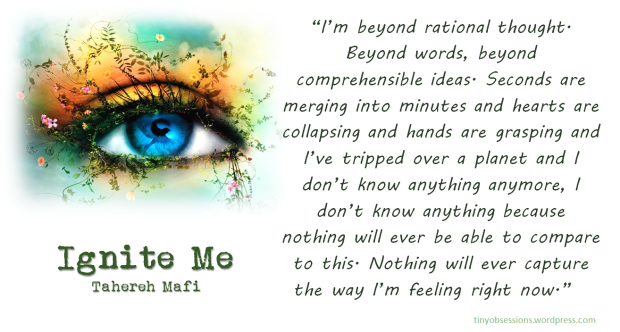 By the way, “Lift your hips for me, love.” will forever be etched into my brain…

(Also, why do I keep imagining him slightly british when he calls her “love”? I keep going to Tom Hiddlestone accent… don’t know why…)

This was my second favorite thing about this book: Kenji and Juliette’s friendship. I want a best friend like Kenji! He’s hilarious, so damn funny, and I loved all their talks. I loved that he took the time and had the cool head to actually listen to her. Even if he thought she was a bit mental for trusting Warner, he still listened and understood. Such beautiful moments there… 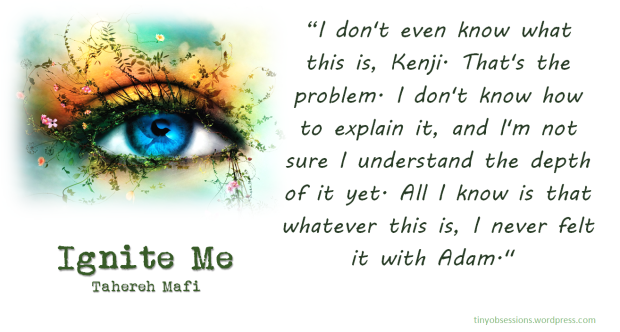 Adam vs The World

When I started to read Shatter Me and loved Adam, I talked to Kat @Life and Other Disasters and she told me she didn’t like Adam, that he did something bad. I couldn’t understand, I believed I could never hate him, ship Juliette with Warner, maybe, but dislike Adam? Not possible!

Then I read Fracture Me and my feelings for Adam started to change very drastically, and then I got to this book and I wanted to kill him each time he opened his mouth! It’s not that I don’t understand where it’s coming from, I can understand that, but what he said to Juliette? Some of that stuff is unforgivable in my book.

But I did like that Juliette stood up to him (you go girl!), but this Adam?! GOD! By the end he seemed a bit more mellow, but he was just so stupid throughout everything… I didn’t like it, and I didn’t like him! 😦 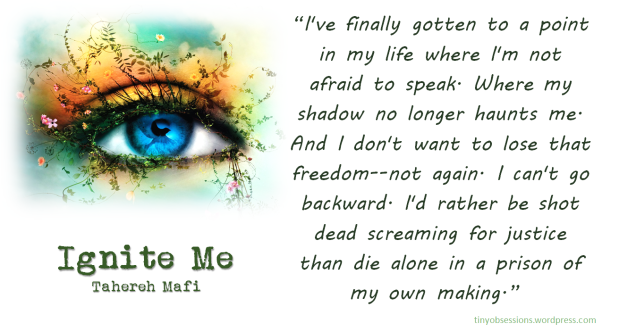 I really liked that ending. I liked that Anderson died with 2 bullets to the head – though Juliette, love, it should have been “One for Warner. One for Adam.” and not the other way around… but hey, I forgive you. 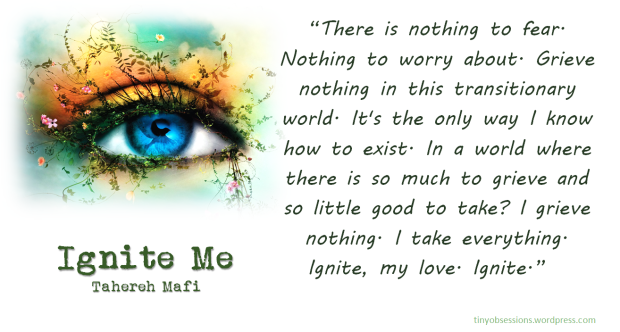 I loved all the powers and projections and stuff. I’m a huge fan of Warner’s power and how quickly he was able to control it.

I loved Juliette’s relationship with Warner. I loved that he respected her, her powers and her opinions. And that she did the same regarding him. They ended up being a perfectly balanced couple, and I couldn’t have predicted that on book 1.

WHY I WANTED MORE:

I also would have loved to have a double POV in this book, I wanted to know what Warner was thinking for most of the book, especially during all those weeks when he couldn’t even look straight at Juliette.

I wanted to know more about Winston and Brendan and all of the gang. I wanted backstories and the works. Novellas, maybe? Can a girl dream?

I wanted Warner bonding with Adam and James. I absolutely loved that Warner was the bigger man and showed interest and getting to know his brothers, but I wanted to see him actually interacting with the both of them as brothers. Also, James would be confused as hell…

I wished that Anderson would have been aware that both his children were against him – not that it would have mattered to him… he was a monster.

I wanted to know all the secrets that Warner was still not telling. Come on, we just know that there’s a lot more stuff, right? I wanted everything!

PS: to everyone that told me that Warner would win me over and that I would change my opinion of him from the first book on… you were so so right!

PS2: I’m so unwilling to let go that I actually went looking for fanfiction last night… I never ever read fanfic before…