Finally, after 3 seasons, Diggle is finally getting his own suit… granted, it’s a bicker jacket and a helmet, but I bet there’s more to it 😀 ! Also, that helmet looks like something Magneto would wear…

Also, a new poster for the show has come out, and it features the Arrow’s new green suit… What do you think?

This promo picture from Arrow was released a few days ago – but I had totally forgot about it until today. It shows Oliver’s new get-up! 😀 It’s greener! We’re slowly getting to the Green Arrow we all know. 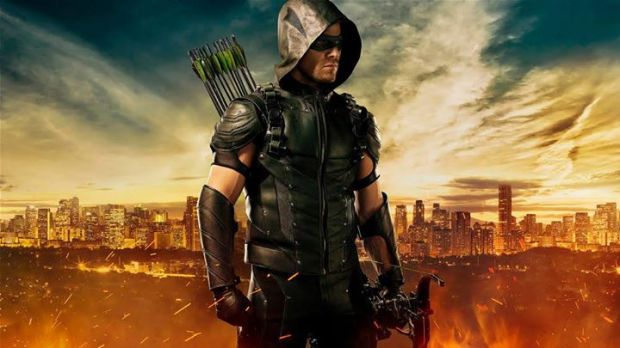 So, I know I’m a bit late with this… the season finale was already a while ago – and I had Arrow up to date – but I’ve been mulling over about what to say about it.

I think thinks of anything more to say, except that I really hope that next season is slightly better and that they do the Olicity thing right!

In case you were somewhere hidden under a rock yesterday and did not come across the new Arrow promo for the next 5 and final episodes of this season, well, here it is:

So… it looks insane!!! First things first (for all Olicity fans out there): IT APPEARS IT IS FINALLY GOING TO HAPPEN!!!!

On other news, someone will try to kill Roy – I’ll be very mad if they succeed…

Oliver will team up with Ray to protect the city.

Oliver will try to break Roy out of prison – lets all hope he’s alive until then.

Oliver will say yes to the offer and join the league – not really a big surprise given that in The Flash promo photos he’s wearing the league uniform.

Thea vs. Ra’s Al Ghul… not a chance in hell, but very cool anyway!

Again… Felicity and Oliver! I can’t stress enough how happy I am about this, I do hope they don’t screw it up, and that it’s not a dream or fantasy or something of the sorts… Also, Ray does look so disappointed…

It’s always incredible when a 22/24 episode per season show can still pull the rug out from under you on the middle of the season. Be warned, they will be spoilers!

Lets start with The Flash and that amazing episode. The villain was intriguing, Cisco and Caitlin were hilarious and sweet and funny (as usual). But Wells, oh man, Harrison Wells!!! We had all figured it out a while back that he was the man on the yellow suit, but now he’s not only gazing at his suit, he’s speeding. Oh yeah people, Wells is running (Flash running) and leaving behind a red lighting. But something is wrong though, he’s not able to maintain the speed and in fact, for a moment there, he’s not even able to stand up. This beg the question, is he really the “Reverse Flash” we saw a couple of episodes ago? Or they are in fact the same person at different moments in time?!

Damn it, it looks like The Flash writers really know what they’re doing. Perfect moments come whenever Joe and Barry share the same space, their relationship is just magic – and Joe might just be my favourite character on this show. Even Iris was pretty OK this week.

Now lets move on to Arrow and Team Arrow shines one more. For me this episode really brought Roy and Laurel up.

It’s so amazing to see Roy be a man, something he’s not often allowed the chance to be, being the youngest of them all, but here he helps Laurel come to her own, he stands up for Thea and wow, his fight choreographies are just the best.

Laurel Lance, wow, and I never thought I would say this, but wow. They are doing it so right. They are showing how not like her sister she is, but how she deserves a chance to prove that she’s capable. I’m glad she gets her ass kicked and is almost shot, and falls when she tries to jump, and that suit, ugly as hell, but hey, by the end of the episode I couldn’t help but like her a bit more (which in all honesty, was not hard at all).

Felicity finally came around, realizing that the heroes fight for those they love who are still alive and goes to help not only Team Arrow, but Ray Palmer as well. I did not like that closeness between them when she was patching his wounds, though I admit, Ray Palmer is really growing on me (and I would totally watch his would be spin-off).

Oliver is standing! Oh yeah! Did Tatsu really just treated him with traditional medicine and penicillin? And could have happen that as made Maseo leave his wife? Was he somewhat responsible for their child’s death? Just trying to guess here.

Well done Thea, though I do not approve of her relationship with her father, I did like to see her standing her ground and lecturing him, it was nice for a change to see how grown up she’s gotten. And what about that last scene, hey?! So her DJ/Wannabe Boyfriend is a member of the League?! I did not see that one coming!

The fighting on this episode was insanely good. Between the Arsenal/Black Canary team up and the flashbacks to Hong Kong with Maseo and Tatsu and Oliver fighting, and Tatsu and Maseo killing those League members like it was nothing… brutal! Amazing!

Arrow is back and let me take a moment to wipe all the tears away (and now my headache just got bigger). Left behind is an incredible well chosen title… Oliver is gone and everyone is feeling a little left behind… Caution, there will be spoilers.

With Oliver gone for 3 days, Team Arrow does its best to keep the baddies of the streets, with Diggle wearing the Arrow’s costume and being a rather bad bowman. Still, Roy and Diggle raise to the challenge and do their best, while Felicity commands the troops from the Arrow cave, all the while maintaining that Ollie will be back, he has always came back before. The boys though, are not so sure and John tries to warn her that she should ready herself, that maybe this time things did not went Oliver’s way, but she’s having none of it.

It’s not until Malcolm gets there (for the second time) with the sword that killed Ollie, with his blood all over it, that she crumbles and admits that he is gone. Then, unable to process her grief, she tells off Ray on his plans for the ATOM suit, saying that she can’t lose another friend, and allows the bad guys to run off with a bunch of evidences, which will allow most of the people they had put away for the last 8 months go free, because she was afraid to lose Diggle and Roy too. This leads her to conclude that there is no “it” without Oliver, she’s DONE.

Roy is broken by the lost of his friend and mentor, and Diggle is as lost as Felicity, not knowing where to go from there. Meanwhile Laurel deals the only way she can, she puts on her sister’s Canary costume and off to the street she goes, after the bad guys that were released for lack of evidences.

Meanwhile, in the flashbacks to Hong Kong, we learn that Oliver went against Waller’s orders and helped Maseo in getting Tatsu back. And this is the reason he’s alive, Maseo takes him to Tatsu in order for her to save him (as to how, I assume we are going to learn next week). So, take a deep breath people, Oliver Queen is ALIVE! 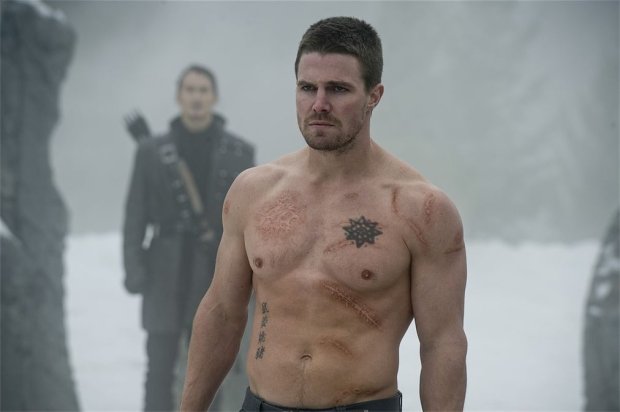 Ra’s al Ghul and The League of Assassins give Oliver 48 hours to deliver Sara’s killer to them, otherwise they will kill 50 people a day. This puts a rush on team Arrow to find the killer, which they do. The DNA from the arrow matches Oliver’s and this leads him to think that Malcom Merlin set him put. They’re able to find out that Malcom was indeed in town when Sara was killed, but more, he wasn’t alone, Thea was with him. So Oliver asks her about Merlin and she plain out lies to him. So he returns as the Arrow to ask some questions and she fights him and gets away (while defending Merlin). Soon after Merlin seeks out Oliver and shows him a video of Thea murdering Sara, while under the influence of a powerful drug that made her susceptible to suggestion and then she forgot everything. Knowing that the League will hold her guilty (even with the knowledge that Malcolm drugged her), Oliver has no other choice than to take his sister place and reveal himself as Sara’s killer to Ra’s al Ghul, Nyssa and the others and demand a trial by combat, which leaves him with 13 hours to set his affairs in order.

Oliver then says his goodbyes, warning Thea that Malcolm is not to be trusted (which she ignores completely), saying goodbye to Roy and urging him to protect Thea, declining John’s offer to accompanying him and saying goodbye to Felicity, where she asks him to kill Ra’s al Ghul and he tells her that he loves her. He then proceeds to the CLIMB, ultimately arriving to the neutral ground that Ra’s has set for their match… obviously he loses, ending up with a blade through his chest and falling from the top of the mountain…

Everywhere else, Dinah Lance arrives to town and notices right away that something isn’t right, Laurel crumbles and tell her that Sara is dead, promising to make whoever did it pay, to which Dinah is all for. Meanwhile, Ray shows Felicity his plans for the ATOM suit and asks her help to protect the people in the city. 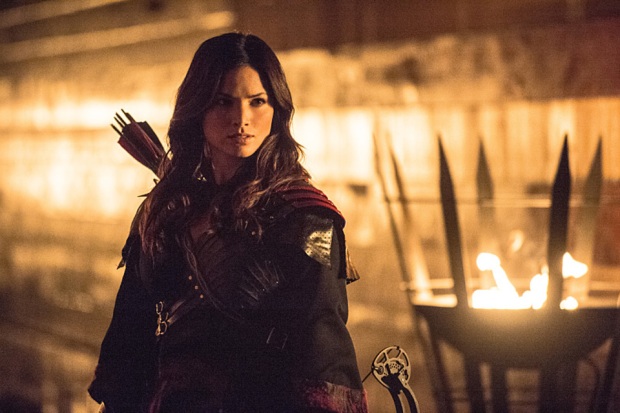 Let me start by saying that it’s pretty cool that we have two superheroes who live in the same universe… that means we can have more moments like these!!! The crossover event was pretty amazing, very cool scenes, witty dialog, a bit of stabbing at each world and methods, but most of all a realization that these two guys are really friends and that’s just super! 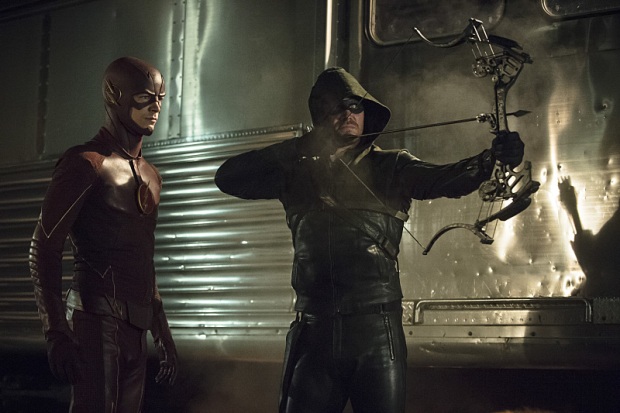 The Flash – Flash vs. Arrow:

Arrow – The Brave and the Bold:

CW has released the trailer for the epic crossover that’s going to take place next week, 2 episodes with Arrow and The Flash and all their teams together! Episode 1 of the crossover event, The Flash episode 8, will air next Tuesday (2/12/14)!!! It looks awesome!

This week’s Arrow, Draw Back your Bow was all about relationships.

My Tiny Obsessions
Blog at WordPress.com.