Hello guys 🙂 . First of all I want to apologise if I’ve been a little out of of it, and taking a little time answering to comments and whatnot, but I’m currently home in Portugal, and that means having to divide my time a lot more 🙂 . Either way, onto the The “I Messed Up” Book Tag, which I was tagged by Deanna @A Novel Glimpse… THANK YOU 😉 .

A character appearance that you misread or imagined differently: 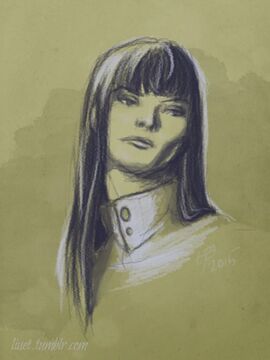 This one is easy, and I’m saying Sybil Mira from The Lunar Chronicles. Truth be told I don’t think she’s ever overly described, but due to her personality and mannerisms, I’ve always pictured her in a very specific way, and that is like the actress Ruth Negga.

A character name that you’ve been pronouncing wrong:

I’ve tried, I’ve really tried, but I still struggle to say Chaol Westfall name correctly. I pronounce Chaol as “Cole”, when I should be saying “Kale”… Is it just me?

An overused trope that is your guilty pleasure:

I love love love enemies to lovers romances. It’s just so cute, to read all the angst, lol. I love it.

A cliché character type that you like better on screen than reading about:

The innocent ingenue girl. I don’t know why exactly, but sometimes they get to me on books, and I just want to kick their asses.

A word/phrase you learned because of its use in a book:

So… this is a bit embarrassing, but I remember a couple of months ago I was reading a book (don’t even remember which one, and the term “I’m getting a chubby” appeared on my kindle. Now people, remember I’m from Portugal, and we don’t learn these kind of expressions in school and it’s not like I remember ever hearing it, so I had to actually google it. Yeah… now I do know!

Have you ever not read or completed a required reading book for school?

OH YEAH! I’ve mentioned Os Maias a few times right? Let’s just say that it was a required reading, and I had the book, opened page one, read the title, and closed it right after and never ever picked it up again.

Have you ever (or wanted to) skipped a chapter from the point of view of a character you weren’t interested in?

I don’t think I’ve ever done it, but I’ve wanted to do it several times. For instance, Agatha’s POV on Carry On, or the Simon Snow parts of Fangirl.

Have you ever cancelled social plans to read a book?

LOL, nope, but I automatically don’t make plans if I feel like it’s a reading time. 😀