On the outside, seventeen-year-old Madelyne Summers looks like your typical blond cheerleader — perky, popular, and dating the star quarterback. But inside, Maddie spends more time agonizing over what will happen in the next issue of her favorite comic book than planning pep rallies with her squad. That she’s a nerd hiding in a popular girl’s body isn’t just unknown, it’s anti-known. And she needs to keep it that way.

Summer is the only time Maddie lets her real self out to play, but when she slips up and the adorkable guy behind the local comic shop’s counter uncovers her secret, she’s busted. Before she can shake a pom-pom, Maddie’s whisked into Logan’s world of comic conventions, live-action role-playing, and first-person-shooter video games. And she loves it. But the more she denies who she really is, the deeper her lies become…and the more she risks losing Logan forever.

I’ve been meaning to read this book for a while now, so when Entangled put it up on Netgalley, I jumped at the opportunity to review it, so I ended up reading it with Cátia @The Girl Who Read Too Much, as a buddy read, so check out her blog in the next couple of days to check out her take on the book.

I really really enjoyed this one. Maddie was not the best main character at all. Her doubts and fears alone could have put me off immediately in regards to this book, but I loved the writing and Maddie’s voice, which made me feel somewhat more permissive towards Maddie’s troubles.

This book was hilarious!!!!!

As I said, Maddie was not the easiest main character to love. Her fear of being recognized as a nerd, and the lengths she goes through to hide it are maddening. Some of her comments about the nerds are awful. But she does grow up a lot, and her feelings for Logan are beyond cute.

Logan was amazing! I have no words. I just wanted to read comics with him and go LARPing too, because that all sounded super great.

I really liked the romance as well, and this was such an easy and fast read. I loved it. It made me laugh and swoon, so I have to recommend it. Maddie might frustrate you at some point or another, but remember: it’s all worth it!

This week’s theme is “Everyone needs at least one lazy day! Choose a book you would want to read in a lazy day at home or the beach“.  I’m going to keep it very simple, and say a book that I’m gonna read soon, and that sounds perfect for a day at the beach: The Summer I Became a Nerd by Leah Rae Miller.

This is the US cover, and one of the only 2 covers available, and I actually hate it. 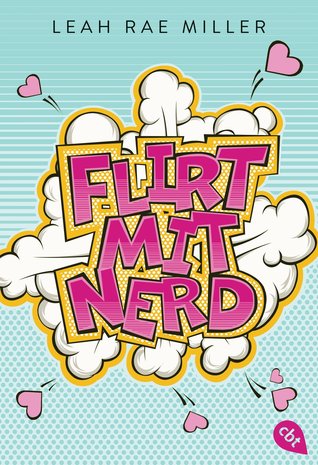 The German edition is actually my favorite. It’s just so cute!!!

Again… the original one is just a big NO to me.