I just couldn’t wait for June 6th for the movie to premiere in Spain, so I took advantage of the fact that I was in Ireland for the weekend and went to see it last sunday! =D =D =D Although, I plan to watch it again once it premieres here in Spain…

I loved it! I always loved the time traveling stories in X-Men (animated series and comics), so it was great to see it on the big screen. I will probably drop some spoilers ahead, so if you want to avoid them, stop reading! So mainly, Wolverine has to get back to the past to stop Mystique from assassinating Trask, so that they won’t build Sentinels with her DNA that are capable of adapting to everything that’s thrown on them.

I love the 70’s era, it’s great to see the young actors portray the characters that we know and like so much. Although I was a little disappointed that they only showed Havoc for a brief scene and that he wasn’t anywhere to be seen later on, I do enjoy having a lot of Hank McCoy in the screen, because Beast is just awesome. James McAvoy totally stole the movie for me, I always knew that he was a great character, but bringing bitter and nasty Charles Xavier to life can’t have been an easy task. Amazing as well were all the scenes with Evan Peters as Quicksilver, specially the kitchen scene… you know what I mean!

But I have to be honest, the scene where I totally gasped was the totally nude Logan coming out of bed! Come on, how hot is Hugh Jackman?!

And how cool did Jennifer Lawrence looked in this movie?! And the fighting?! And so different from X-Men: First Class, right?

Equally great was seeing the future, however destructive it was, because it showed Kitty and Bobby as true leaders, it gave us Bishop (ohhh, I always loved Bishop) and a good Magneto. More importantly, it gave us Blink and Warpath – by the way, how much has Booboo Stewart grown, right? – , both of which I was amazed by! Not so cool was watching them die, several times… although Storm’s death was agonizing, I have to admit that seeing Iceman’s head roll over, or Colossus being torn in 2, was far far worse.

Luckily, Wolverine manages to do his job, Mystique doesn’t kill Trask, she stops Magneto, and everyone get along with lives. Bonus points to Mystique for fishing Wolverine out of the water impersonating Stryker. When he gets back o the future, there is no more war, no more Sentinels, just the institute, with everyone there. Bobby and Rogue (she lives, although mostly cut from the movie), Colossus and Kitty, Storm, Beast (in his Kelsey Grammer “suit”) and Jean, oh yeah, Jean Grey alive… and with her man… Scott Summers (I cried on this one, because I love Jean and Scott so much!)… and off course, Professor Xavier, who found them all, because he had “a promise to keep”!

Sunday, about a week ago, late at night, I came across the news of a symposium being held in Galway, Ireland, in just a few days (23 to 25 May) and so I was torn between the fact that I really wanted to go, and the fact that the symposium was only 4 days away!

So, I did what any normal person would do: I searched the flights, hotels, prices and so on, and within 24 hours I had all of my trip booked and I was ready to go!

Thursday, 22nd May, after a long day, I got on my way to the airport to make my way to Dublin, where I got around 00:30 AM… Next morning, after 2 and a half hours on a bus seeing nothing but green fields, sheeps, cows and horses, I got to Galway =) !

Galway is such a nice little city, I really liked it. The symposium was well worthed, even if in the middle of a lot of interest things was stuff that I really couldn’t care less about… (sorry Geology!). But all in all, well worth my very long trip to Galway, mainly for Prof. Svante Pääbo‘s public speech on the Neanderthal genome, which had Ireland’s president Michael D. Higgins in assistance.

Supernatural has (finally) promoted Mark Sheppard (a.k.a. Crowley) to series regular for the upcoming 10th season, meaning that he’ll join  Jensen Ackles, Jared Padalecki and Misha Collins as part of the main cast!

I’m so happy about this! Mark has made Crowley the perfect King of Hell, that one can’t just not love (to hate) him. Luckily we’ve seen a lot of him this past few years, but here’s hoping that we’ll see him even more.

BBC has confirmed that the new season of Doctor Who, starring Peter Capaldi as The Doctor, will begin in August. Great news!!!! I can’t wait!

The second trailer for the Guardians of the Galaxy is out! It looks just as amazing as the first one, but now we see more characters and more action 😀 !!!! I really can’t wait!

When I decided to go and watch this movie today, I had no idea that it was the continuation of the previous two (which I loved), I just knew that the main actor was the same and so was the director. I was pleasantly surprised when I recognized them all…

Just like the two previous ones, this is an amazing movie, that deals with the themes of divorce, custody, trying to get a green card or find an affordable apartment, and of course… friendship. And just like the others, they each stand alone, but they all go great together. I’m planning to watch the previous ones sometime this weekend, because it has been too long.

Hands down, one of my favorite things about this movie is Xavier and Wendy’s fights… 😉 And OMG, could their son be any more adorable?!

If you have watched the previous movies, you should definitely check this one out. If you haven’t, what are you waiting for?!

I’m way behind on my The Vampire Diaries, but this piece of good news just made want to get right back into it. If you haven’t seen the finale, I don’t want to spoil anything…

Following the events of this season finale, some people made it back to the world of the living, and some went on… Alaric (Matt Davis) made his way back, and apparently he’s staying put! Matt Davis has just been promoted to series regular for season 6!! I love Alaric, and his relationship with Damon was, for me, one of the biggest achievements of the show… of course, Damon himself is no longer in the picture… but don’t worry, Julie Plec has confirmed that he will be back… somehow…

The Arrow baddie, John Barrowman (Doctor Who and Torchwood) was just promoted to series regular in the upcoming 3rd season of the show. Stephen Amell broke the news first on twitter. 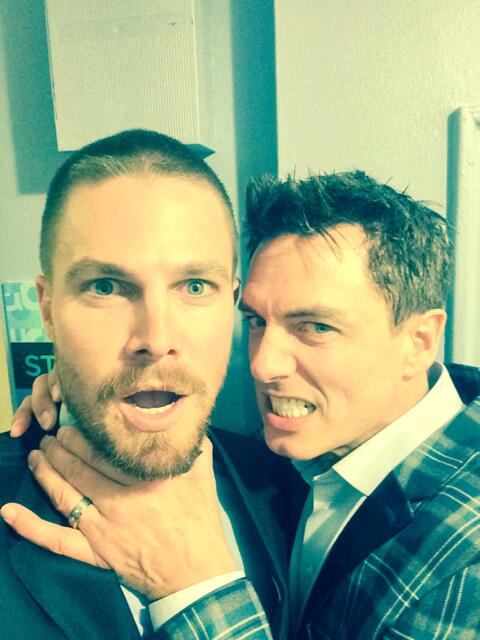 I have to be honest here, I haven’t watch one single episode of Arrow yet!

I’ll watch it as soon as I have the time this summer, but I haven’t been this excited about a trailer as I am with this one in a long time… maybe ever! The Flash extended trailer came out today, and it looks AMAZING!!!!! It has some elements that kind of remind me of Smallville… =)

“After a particle accelerator causes a freak storm, CSI Investigator Barry Allen is struck by lightning and falls into a coma. Months later he awakens with the power of super speed, granting him the ability to move through Central City like an unseen guardian angel. Though initially excited by his newfound powers, Barry is shocked to discover he is not the only “meta-human” who was created in the wake of the accelerator explosion — and not everyone is using their new powers for good. Barry partners with S.T.A.R. Labs and dedicates his life to protect the innocent. For now, only a few close friends and associates know that Barry is literally the fastest man alive, but it won’t be long before the world learns what Barry Allen has become…The Flash.“

The 9th season of Criminal Minds came to an end yesterday, and I have to say that this was probably my favorite season to date, and the last couple of episodes just blew my mind!

The team goes to investigate the murder of 3 prostitutes, only to find themselves amidst a coverup and a rogue and corrupt police force. It’s an amazing couple of episodes, with a lot of great guest stars, a few things you will not see coming and a lot of bullets! Everyone’s life is at stake! That said, Reid is shot in the neck, Morgan is shot 2 times in his vest and one time in his arm, Hotch gets punched around and JJ and Garcia both save the day (on different places)!

This is an example of this that are not OK and that the show should never, ever, do again:

Spencer Reid almost dying is not OK, ever! Please never do this again… not my precious pretty boy…

That said, Reid ending up in the hospital allowed Garcia to be an awesome friend, and adorned his hospital room with Doctor Who related things: 2 little Daleks and the 10th and 11th Doctor figurines.

After this, Blake and Rossi have an amazing exchange, where Rossi tells her about a supposedly good day, that ended up being the worst day, because he was so focused on work that his wife left him. This, after Reid’s shooting, leaves her wondering.

Then Garcia saved the day, by saving Reid and shooting a bad guy… the look of panic in her face was priceless!

They manage to take down the corrupt cop and his operation and they all return home. Blake takes Reid home and explains to him that her son died at the age of 9, of an unknown neurologic disorder, and that it still haunts her, and he, Ethan, would have grown up to be just like Reid. She leaves, leaving behind her FBI credentials… Goodbye Alex Blake, I will miss you! I liked you even more than Prentiss…

We must be willing to get rid of the life we’ve planned so as to have the life that is waiting for us. – Joseph Campbell